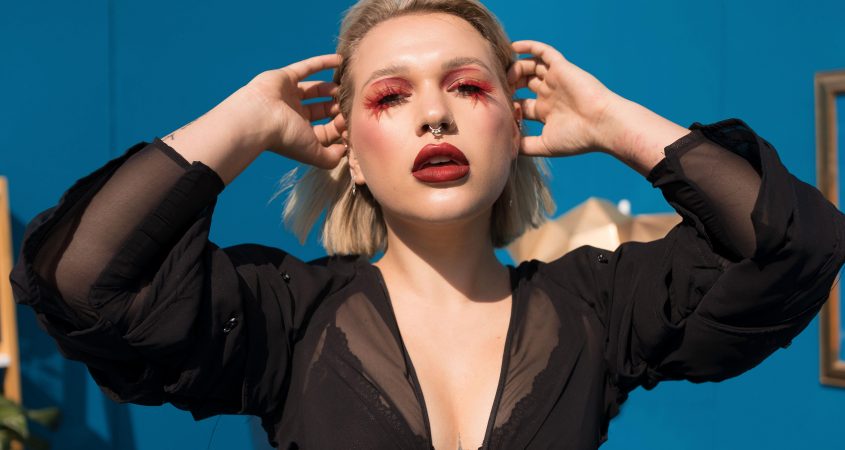 So without further ado, please enjoy the stylistic swagger and powerhouse vocals of… Aya Yves!

YOU CAN VOTE FOR AYA YVES BY CLICKING HERE

How was Aya Yves, the artist, birthed?
I’d been wanting to branch out from acoustic music for a while but hadn’t been brave enough to make the change, until I wrote what became the debut Aya Yves single – (in)Sanity. I knew it felt different to everything else I’d written up until that point and used it as a sign to switch it up.

As for the name – I had an incredibly vivid dream about it, so I decided to listen to whatever place that message came from.

Describe your sound:
Emotive storytelling in a dark, electronic alt pop soundscape. Inspired by the likes of London Grammar, BANKS, Bon Iver, and The XX.

To those new to your music, which three tracks should they check out?
Ooh, I only have two originals out at the moment. Smart Girls is the newest one…

And (in)Sanity was the debut:

But I do also have a cover of Dua Lipa’s Don’t Start Now out too!

So I guess those three.

What drew you to music? And what keeps you going?
I’ve been drawn to music for as long as I can remember. There was never a point where I didn’t want to be a singer; I sang all the time as a kid and put myself on any stage I could.

In terms of what keeps me going – I’d say the ultimate motivations are expression and connection. I’m quite an anxious person in my day to day life, and I’m constantly worrying about if I did or said the right thing, and what people thought of me. But on stage – I don’t think of any of that. I just feel. I feel at peace in my mind and soul, and am free to be my truest self.

The other big motivator is being able to connect with an audience. Share in a moment, be vulnerable and trust they’ll facilitate a safe space. Create a space to feel and release whatever emotions they need to.

What are some of the most memorable experiences you’ve had?
There’re so many, but most recently it would have to be opening for Hands Like Houses at EPIC. We had a tech rehearsal on the Friday, everything went smoothly. I wore the outfit I wanted for the actual show just in case there were any malfunctions – and there weren’t. We all played/sang well and felt great about the show the next day!

Saturday rolls around, and everything that could’ve gone wrong decided to. My pants broke just before we ran on stage so I was sewing them up in the wings; I had a slight issue with my in-ears; my top strap broke on stage; the piano made a weird electrical noise halfway through a song; and the smoke machine made me lose my voice just before our finale.

Thankfully we made it through without people noticing the issues but OH MAN is that day burned in my memory.

What pisses you off?
Climate Change, Racism, Sexism, Homophobia and people who play their music over bluetooth speakers when hiking.

How does it feel to be nominated?
It’s pretty surreal! Considering the Aya Yves project is so fresh and myself and my band haven’t had the opportunity to play many gigs just yet I’m very grateful that someone in our community thought I was worthy of a nomination.

Why should the slavering general public vote for you?
Ooft. It’s a pretty incredible list of nominees, so it’s a tough call. I feel very privileged to be among them.

I’m going to be doing this for the rest of my life, and am honoured to be able to facilitate connection and vulnerability through what I do.

If my music resonates with you, if my words have meaning to you, or if you’ve seen me do my thing on stage and think it’s groovy – then sure, send me a vote.

What are your plans for the future?
Write, record, release, tour (when allowed), repeat. A little bird tells me there’s an EP on the horizon soon…

Anything else you’d like to add?
Myself and a bunch of incredible Canberra creatives worked super hard on a music video for Smart Girls recently – you should check it out!

CONVINCED? YOU CAN VOTE FOR AYA YVES BY CLICKING HERE