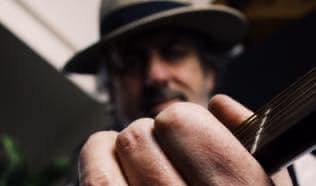 Blues guitarist and singer-songwriter David Williams has just released his EP, This Town. The Canberra based artist has been playing music in the Canberra region and beyond for almost 40 years.

He has recorded many works as well as with others including David Pendragon, Loz Lawrey, and Marji Curran Band.

He has been a member of Barrocca-Bye Babies, West Texas Crude, Williams / Montgomery-Wilcox and the Marji Curran Band.

This Town is replete with displays of David Williams’ wide-ranging skills; a masterful guitarist, evocative vocalist, and versatile songwriter. From the opening resonator and harp strains of Ain’t Gonna Be Your Fool to the blues groove of the title track, the blues roots rock genre in many of its glorious permutations is represented here.

The opening track begins with what one thinks will be the governing style, but the track soon detonates into a rousing barroom stomp of a song, featuring the grittier tones of David’s voice and the efficient dynamics of the band pulsing behind him.

With Game Of Life we are given a faster blues shuffle feel, with some tasteful guitar touches and a lyric which ever so gently alludes to the politics of life.

Perhaps the most accessible track on the EP in terms of pop-rock sensibilities is Sometimes You Win Sometimes You Lose, a reggae-infused number that utilises a more traditional song structure, allowing for a memorable assortment of melodies to stand out.

There You Go contains what must be the most rock-anchored aesthetic with some jangly guitar work, distinct harmonies, and an astute arrangement of dynamics. The last track is well placed, bookended by expressive acoustic guitar work and David’s soul-searcher vocal foraging through the past: ‘This town is a tinderbox waiting for a spark’, gives us a hint as to the subtle menace that underpins the narrative.

Overall, this is a fine collection of performances and songs, coalesced into a very admirable whole that’s worthy of checking out.