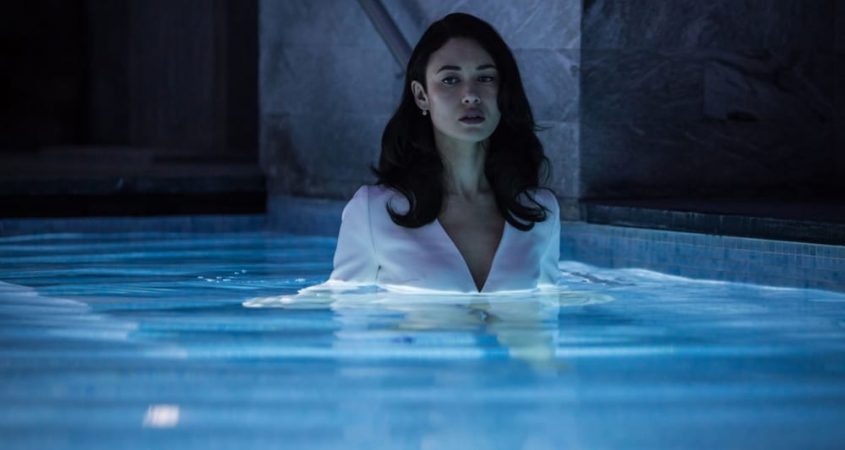 The manuscript for the final volume in a thriller trilogy that the reading public has eagerly awaited is now ready for translation.  Determined to leave no possibility of its piracy before publication, publisher Eric Angstrom (Lambert Wilson — The Royal Exchange) has the manuscript’s translators do their job in house: locked into a sumptuous underground bunker within a billionaire’s mansion hideaway, and with no means of communication with the outside world.  Yet, somehow, the first ten pages leak to the public, and a ransom demand threatens the release of the following hundred pages.  Angstrom, whose publishing empire has burgeoned on the sales of the trilogy’s first two parts, and with a further fortune riding on the public’s anticipation of the finale, will let nothing stop him from finding which translator leaked it and learning how he or she managed to pull it off.

Great camera work and soundtrack on action outside the mansion, varying from low-tension backstory to high-energy action, help in varying the film’s pacing as it offers deceptively forthright clues to the heist’s perpetration and its motivation, invoking the crucial element of tantalisation in a mystery free of excessive fear and anxiety.

Having assembled a stellar cast, including Olga Kurylenko (The Water Diviner), Riccardo Scamaracio (The Summer House), and Alex Lawther (The Imitation Game), Régis Roinsard has directed a thriller built on intelligently plotted mystery.  Not strictly a whodunnit, in the sense that important scenes fool the audience rather than any character taking part in them, The Translators uses the ransom demand as a springboard for events part cat and mouse and part simple misdirection.  Angstrom’s desperation to uncover the perpetrator builds tension steadily and, as you hope for in a mystery, leads through a series of amusing twists, turns, and plummeting fortunes to a resolution that will leave you thinking the story through but satisfied that the necessary sleight of hand has treated you fairly.