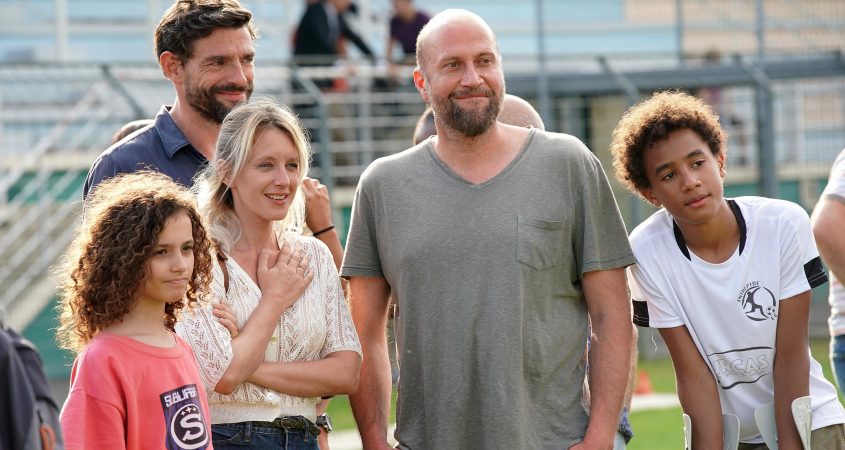 In its opening scenes, Of Love and Lies rapidly sketches the characters of 12-year-old Théo (Meleaume Paquin — Remi, Nobody’s Boy), a child with superb soccer skills and a mature understanding of his father’s difficulties; and his father, Laurent (François Damiens — The Bélier Family; Just to Be Sure), a man who has turned to alcohol at the loss of work and wife. Lauren, a former soccer player himself, lets inebriation combine with fatherly pride and outrage at every unjust act toward his son on the field, with consequent aggressive behaviour at his son’s matches, a continual embarrassment to Théo.

Then an invaluable opportunity presents itself to change both their lives: a talent scout for the legendary English soccer team Arsenal comes to watch Théo in a match. Speaking privately after the match, the scout, though encouraging, tells Théo that he is too short as yet for Arsenal to accept him for training. In relaying the conversation’s gist to Laurent, though, Théo, sensing how much Arsenal’s invitation would mean to him and hoping to help him pull himself together again, tells his father that the scout accepted him.

Naturally, Théo’s lie leads to all kinds of comedic mayhem, to which some characters cleverly contribute, including Théo’s best friends, Karim (Ismaël Drame), who cannot lie; Romane (Cassiopée Mayance), who cannot believe Théo would tell such a stupid lie; and Max (Pierre Gommé), a computer whiz who helps him make fiction believable.

Though carrying a good deal of comedy, Of Love and Lies movingly demonstrates the inordinate results of human kindness. With all of its leads, including the youngsters, bringing genuine human feeling to their roles, the film hits the resounding emotional truths that it aims for and opens our eyes to the entertainment possible in subverting rules meant to be broken.