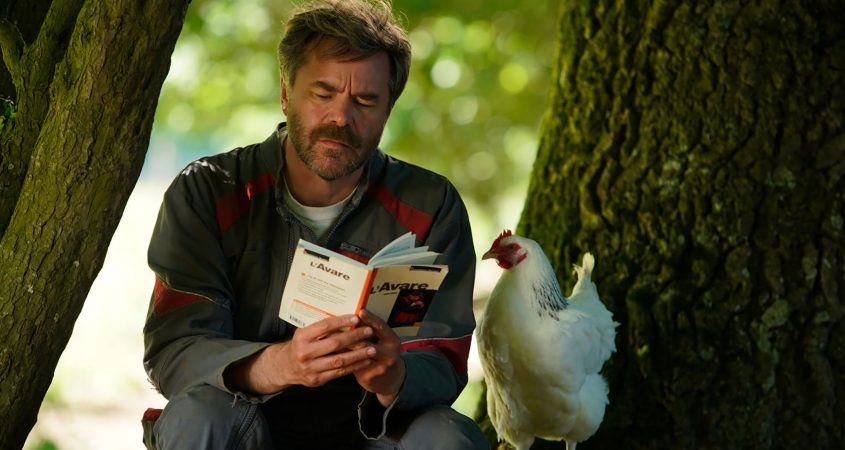 Raymond and his fellow egg-producers just get by, so decide to push for a tiny increase in the sale price of their organic eggs. At a meeting with the buyer, an egg marketing co-operative, they learn, to their dismay, that the co-op will no longer be buying their eggs but will instead buy those coming from an industrial-scale egg-laying enterprise. Not investing in labour-intensive, organic, free-range practices, and able to undercut the small farmers, this single enterprise will capture the market because economic considerations override all others. The co-op will honour the remaining three months of its annual contracts, but then all the other producers in the region will be out of business.

Raymond’s wife, Anne-Marie (Léa Drucker), urges her husband to accept the inevitable and return to working as a carpenter, but Raymond’s Aunt Simone (Liliane Rovère), who has discovered the disseminative potential of the Internet, pushes Raymond to make YouTube videos to create a “buzz”. Reluctant at first, Raymond begins recording himself with his chickens. Having no stage presence, though, he gains little interest; so, desperate enough to bury the hatchet, he turns for professional help to his neighbour and long-time antagonist, Wendy (Kate Duchêne), and together with his friend Poupou (Lionel Abelanski) feels his way toward a solution.

Many of Roxane’s most amusing and engaging moments occur through clever filming of Raymond’s chickens. It is perhaps their nonverbal dialogue with him that is most engaging throughout, but the drama of multiple imminent business failures due to the greed of a single individual maintains tension too. The place of Cyrano and of Cyrano’s love Roxane in the whole may be minor, but Roxane makes for an enjoyable comic drama.