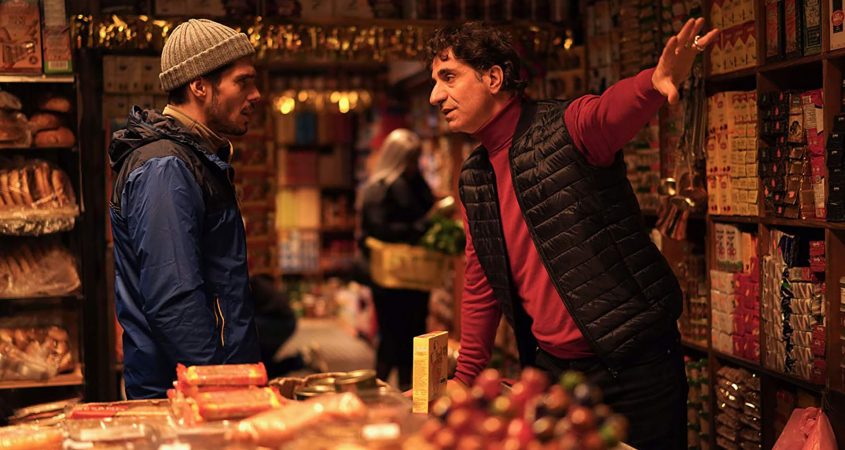 Rémy (François Civil) and Mélanie (Ana Girardot), both single, both hoping for the right one but pessimistic about it, have been neighbours for a year or two. And they’ve never met. Social isolation resulting from big-city living and social media; anger toward his long-unseen father; and the unsatisfying mundanity of his work combine to make Rémy’s prospects dismal. Mélanie’s previous experience in a committed relationship leaves her reluctant to expose herself to further hurt. Rémy and Mélanie are both steady and somewhat flat, and their environments and even the cinematography reflect this.

That is not to say that the film leaves the viewer feeling the same way, though; rather, Someone, Somewhere takes us on Rémy’s and Mélanie’s individual journeys toward each other, leaving us wondering not whether and how they will resolve their discrepancies, but rather when and how they will meet at all.

This atypical approach to a romantic comedy puts us in a frame of mind unusual for the genre, the comedy in the film lying not in the misunderstandings between the protagonists but in how each individually responds to the world. The film is more poignant than comedic, but unfolding events show us the rising probability that they will, somehow, meet and recognise something in each other; and therein lies its chief interest. Psychiatric consultation casts a little light here and there and maintains a thread throughout that is both interesting and heartening Most of the other characters significant to them appear only once or twice, and the closest to a constant character appearing in both their lives is a local shopkeeper.

Well structured, well played, and filmed from an interesting range of viewpoints, Someone, Somewhere is a sometimes surprising, sometimes amusing, original take on the quest for love. If you don’t leave the cinema laughing, the film will at least leave you nodding and thinking about some of the universal topics it raises.