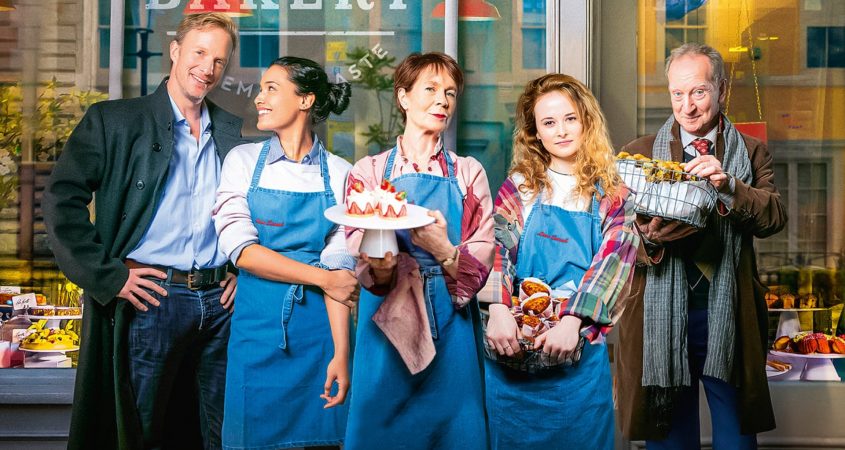 Clarissa (Shannon Tarbet) and her mother, Sarah (Candice Brown), have been estranged from Sarah’s mother, Mimi (Celia Imrie), over a petty squabble. Mimi, regretting what has happened, writes to her daughter, but just too late, as Sarah unexpectedly dies.

Meanwhile, Sarah’s best friend, Isabella (Shelley Conn), was about to open a bakery, with the brilliant Sarah as baker. Sarah’s death of course makes the entire project moot.

Clarissa, finding herself suddenly homeless when her live-in boyfriend reacts to her grief over Sarah’s death by breaking up with her, falls apart and lands on her grandmother’s, Mimi’s, doorstep.  In the meantime, Isabella, unable to find anybody to take over the lease of the bakery site, has been haemorrhaging money.

It’s Clarissa who proposes going ahead with the bakery, with Mimi’s help. Deciding to honour Sarah’s memory by doing so, the three inch their way forwards and turn to interviewing prospective bakers; and that’s when romantic trouble enters in the form of an old flame of Sarah’s, Matthew (Rupert Penry-Jones).

Less about making a business work in an impossibly competitive environment — central London — than about replenishing the spirit, and with a cast that works brilliantly together, Love Sarah is a heartwarming and at times moving tale to stir your interest in sweets from around the world as well as in how the heart heals.  The camera could have afforded to linger for longer on the pastries, cakes, and slices, of which there was a mouthwatering variety; even so, the movie was visually appealing merely for the way in which the leads interacted.

Managing to eschew the gritty hard-edged realism becoming so common in movies set in urban landscapes, Love Sarah — incidentally, the name the women gave the bakery — brings to life the magic of cooperating in an undertaking just a little larger than we are.