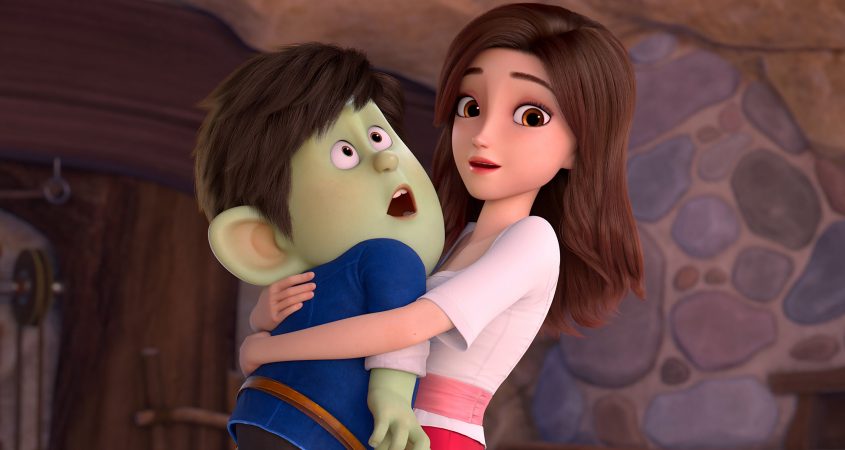 In keeping with modern cinematic sensibilities, the opening scenes of Red Shoes & the Seven Dwarfs feature an action-packed sequence in which the exiled Snow White, daughter of the mysteriously vanished king, makes off with a pair of red shoes to die for — and sets herself up for exactly that, as her wicked stepmother witnesses it.

Actually, the shoes are too good a fit: Princess Snow has a good deal of trouble removing them when she wants to. There is one thing to be said about these shoes, though: they instantly change the young, good-hearted princess disadvantaged by being short and a little dumpy into the most beautiful woman in the kingdom.

On the other end of the magical barrel, though, and with a somewhat different take on appearance, are the formerly tall, handsome, Fearless Seven, who, after insulting a fairy, have been landed with a curse turning them into seven dwarves, all short, dumpy, and green. As you might anticipate, all eight are brought face to face with the primacy of their inner natures over their external appearances. But that lesson is brought home without having it spelt out too much even for the very young audience that the film aims at.

And, though the film well appealed to adult sensibilities, its appeal to young children was undeniable as they laughed aloud at humour they especially could appreciate. Its average soundtrack is well made up for with mostly clear dialogue, good variation in pace, a plot that makes sense, and humour that never flags. This is one that will delight any child up to the age of nine or ten.