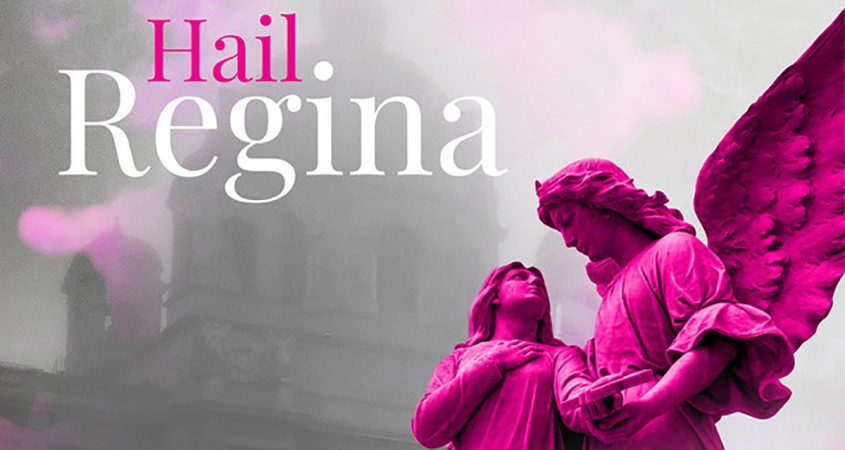 This month BMA was given a look at the construction of a new social satire e-release series, Hail Regina (A Satire of Political & Religious Romp) by Kevin Karmalade, which is looking to be scintillating stuff. We look at its lofty influences leading to its wild storytelling, as well as explore the long-term plans for the series.

This month, HR Arts Factory is releasing the first of six novellas in Kevin Karmalade’s Hail Regina e-book series. The 240pp satire is independently published through Gatekeeper Press. Each novella consists of seven or eight serialised episodes, accessed via e-book app or e-reader.

This dystopian work has specific influences from the Renaissance through to the Twentieth Century. Two Northern Renaissance painters have exerted powerful artistic influence on the crafting of Regina. Pieter Bruegel the Elder (1525-1569) and Hieronymus Bosch (1450-1516) have some of the most unique and celebrated paintings of the pre and early Renaissance. Their works were used as a ‘cyclorama’ behind how Episodes 4 to 8 in the Season 1 novella were penned, then set (into the dystopia of 2025).

The writing process was slow and took time to maturate, according to the producer, HR Arts Factory.

It’s an inside joke that if Bruegel and Bosch were alive today, they’d be surely amused by how this writer interpreted their paintings; then added other layers to form what is a unique social satire for the 2020s and ’30s.

Meanwhile, Karmalade has also attempted to ‘deep-fry democracy’ and warp the Westminster system with this work. He’s put ping-pong into the ring beside clerical mock-burnings as vulgar entertainment. There is a drunken donkey-general with gastritis and aerial dwarf-cupids in leotards, performing over a whacky nativity.

Readers will be treated to a vintage surf-lifesaving reel that attaches a ‘mortal-chord’ to a baby-Jesus. Of course he is crucified, ascends; and returns to the adulation of the officials that rule the State. Servants crank the reel-handle, as the thespian ‘Jesus’ returns from the heavens with his ‘life-saving’ chord and harness, magically still attached.

There’s the elite of the Capital, dressed in masks and Tarot costumes who appear at a gala-ball for ‘charity’. These chapters are somewhat bizarre; part real. Just like Bruegel’s work seems to be, now five centuries on.

Prohibited romantic confessions in St. Dandy’s Cathedral laundry cupboard take place. The donkey performs in a governor’s hat and tutu—beside nativity puppets. And the mouth of a dwarf-curate is used as a goalie’s net for a ping-pong competition.

Is there any point to this unceasing sequence of amusements? Well yes.

The Hail Regina work has a far-reaching goal. The long-term plan is for a stage production, notwithstanding the extreme challenge of finding the backers with big-pockets, to bring Hail Regina from the page and into the theatre.

Two other works that affected this release include Gulliver’s Travels by Swift (1726) and The Master and Margarita by Mikhail Bulgakov (1928-37/1967).  For those enthusiasts who have indulged in Bulgakov’s surreal world, then Hail Regina should not disappoint.

The producer, HR Arts Factory, is an arts-based, experimental AV lab. It has a concept EP out and an album underway. Audio-theatre e-plays of 9-10 minutes provide a doorway to the soundscape of the work.

It will be a long road attempting to stage Regina. At least it will be a journey filled with colourful, edgy moments and set pieces.

Bruegel and Bosch may well be laughing (hauntingly) from their graves. Pleased perhaps that their legacies are still alive and kicking. And inspiring new generations of art and artists into the foreseeable future. Should the series make it to the stage, these two Renaissance artists will surely be there in spirit – in someway, somehow.

At the very least, the stage backdrops are likely to feature their work…

For more info head to hailregina.com