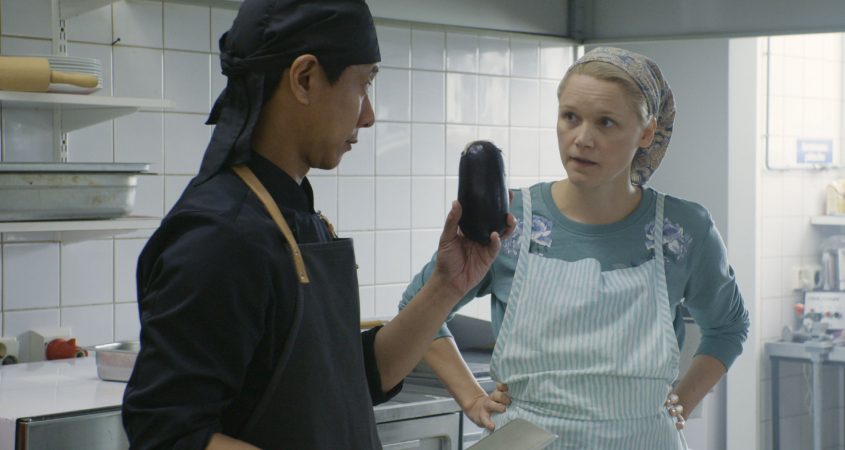 Cheng (Pak Hon Chu) travels with his young son, Nunjo (Lucas Hsuan), to a remote village in Finland in search of his friend Fongshon.  He enquires at the tiny village’s local café, owned by Sirkka (Anna-Maija Tuokko), but no-one knows of anyone called Fongshon.  One or two suggest a town at some distance where he might be found; but it’s now late in the day, and Cheng has no way of travelling on.  Sirkka, taking pity on Cheng and his son, offers them a place in which to stay for the night.

The following day, Cheng is in Sirkka’s café when Chinese tourists arrive on a bus and are displeased by the local cuisine.  Cheng, a professional chef, steps in to help Sirrka by cooking a dish that the tourists will enjoy.  Over night, Cheng transforms Sirkka’s fortunes as Chinese tourists flock and the locals come to love Cheng’s creations.

This is a gentle film set in a vast landscape, some of which is beautiful and some harsh.  The cinematography invites the viewer to sit quietly and to simply enjoy, although there is a prevailing undercurrent of sadness for most of the film.

This story of loss, friendship, generosity, and love offers many delights, although there are a few minor plot flaws, and in some of the scenes, though I’m sure directed that way, the acting is inconsistent with the characters’ natures.

Pak Hon Chu’s depiction of Cheng is a lovely balance between the gravitas natural to a man of his culture and experience, and his depth of heart, as he privately manages his grief and takes responsibility for his son while bringing joy to others’ lives.

Locals Vilppula and Romppainen, played by Vesa-Matti Loiri and Kari Väänänen respectively, are stand-outs; without them, the film would be much the lesser.

Master Cheng is a film for those who have seen something of life and who appreciate the place of hope.  You won’t regret spending time with Master Cheng in Finland.