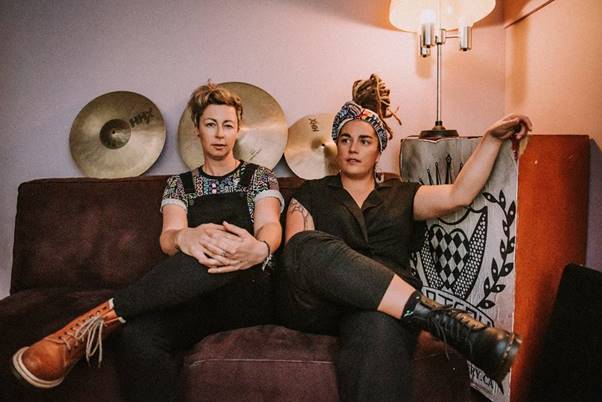 Female two-piece indie pop outfit This Way North has dropped You Be You as the first single from upcoming EP Vol 3, the last in a trilogy of releases.

Formed through a chance meeting at a Canadian music festival, this Melbourne band copped a gong in 2018 for Music Victoria’s Best Regional/Outer Suburban Act. The duo Leisha Jungalwalla and Cat Leahy has demonstrated an attractive variation and inventiveness in such previous releases as the electro infused Night Terrors and the funky Pretty Much.

Recorded in Nashville in January this year (these ladies surely get around a lot), they just managed to lay the new song down before the virus started impacting life.

Using a tremolo approach, You Be You utilises a bright four-note pattern to drive it onwards. Instruments are limited to guitar and drums but the duo use the interaction between their voices to really dress up songs, with smooth harmonies coming in early in the track. Embracing a wistful, easy vibe, vocals unroll in languid daydreams, with a delivery reminiscent of the shimmering sound of the band Dusker. Jungalwalla keeps her guitar notes crisp, except for some yummy reverb leading into the bridge.

You Be You celebrates the differences between people that make the world so fascinating. It also has references to life on the road in a band that refuses to settle in one place. With a theme not dissimilar to their previous song Head Above Water, the band revisits the need to put some distance between yourself and the whirl of the infotech life, singing ‘everybody’s lost now baby, they’re moving so fast’.

Light and shiny, this song rises like a sonic soufflé.