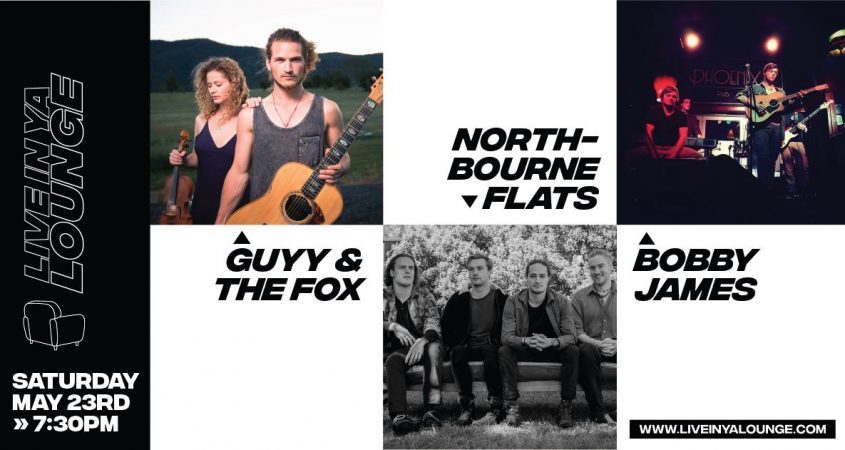 [Live in Ya Lounge stream – https://liveinyalounge.com/project/23rdmay2020/]

Another Live In Ya Lounge comes steaming out of the gates this Saturday night; the supremely slick, locally produced livestream that provides a platform for Canberra region live acts to shine.

And this edition sees a juicy triple-header to enjoy.

But before we get into the bands, it’s important to explore just how much time, energy, and money is being put into these seemingly effortless enterprises. I caught up with EAVS and Live In Ya Lounge overseer Rob Cartwright to get the lowdown straight from the proverbial’s mouth.

“Yeah, it’s lots of hard work actually!” he explains. “For a start, after we initially ran the first one out the back of our warehouse, it became pretty obvious we needed a venue for future events. Coming into the Canberra winter, no one wants to stand around outside…  That became the biggest hurdle, as obviously the heath ordinance act had closed venues.

“So to try and get permission to actually get a venue to use, when they are all closed by the government, was a tricky process to manoeuvre through. It was a mine field, not to mention the documentation and planning to ensure that we were compliant with the, understandably, very rigid health and safety guidelines.

“It was a challenge, to actually put on a concert in a way that was safe for the staff, as well as the performers. The audio/video/lighting stuff is obviously what we’re good at, as that’s our job most of the time. It’s the other bits of running a concert that we also have taken on board.”

The term “pivot” has been used a lot to describe business and individual efforts to adapt to recent circumstances. Rob & co have pivoted more than a Russian ballet dancer.

“Coming up with a script, booking the bands, managing green rooms – 1 person per 4 square metres! – deciding what kind of show we wanted it to be, was it going to be straight performance, do we want to do interviews,” Rob lists. “Normally all that sort of stuff is handled by an executive producer, or the promoter, and we found ourselves trying to wear lots of hats all at the same time.”

The team have been touting sartorial elegance as far as multi-hat-wearing is concerned, and deserve a hearty round of applause as they strut their stuff.

Speaking of which, let’s shine a light on this week’s glittering Canberra performance jewels, shall we?

A band as iconic to Canberra as their namesake, Northbourne Flats are a group of young professionals trying to make it big in the corporate world, but out of sheer necessity have been forced to play music on the side because the money is just so darn good.

Known for acoustic riffs and four part vocal harmonies, they break up their raucous live sound with moments of sudden calm and release allowing their poetic story-telling and instrumentation to shine.

One day the band hopes to follow their true passion of presenting their Excel sheets to stadiums of adoring fans, but right now they’re satisfied with earning the Big Bucks in the Canberra music circuit.

Local songwriter and guitarist Guy Lilleyman opened AMBERLY STUDIOS on his family’s farm in Kambah some years ago. Lilleyman, who is one half of guitar/violin duo Guyy and the Fox, built the studio, and now runs it with his brother, Adam. Lilleyman became interested in recording studios when Guyy and The Fox wanted to record their first album. Before that, as he told us at BMA, “I couldn’t have cared less about mics and stuff like that, I just wanted to make good music.” But his attitude changed when he came to appreciate the enormous amount of creativity involved in being a producer and recording and mixing a record.

Lilleyman first got into music in 2011 after going to the National Folk Festival. “Something clicked in me … I really got it for the first time. I saw Jeff Lang, one notable performance, and I was just like, ‘man, I want to do that’. I had never written a song before that.” Shortly after the festival, he left his day job, bought a Combie and a 12-string guitar, and set out to be a musician. Given this story, it is less surprising that when Lilleyman and his brother got the idea to build a recording studio, they set about building it themselves. “We took to doing plastering for the first time and doing floors, we built all the acoustic treatment,” he says. Once the studio was finished Lilleyman and Amelia Gibson used it to record the Guyy and Fox album.

Soaring violin meets guitar – the music of GUYY & The Fox is a beating heart that will have you spellbound at the edge of your seat. With one foot firmly planted in the soundtrack of a mythic battle and the other in a mix of folk, world and roots music, this award-winning group are powerful and captivating.

Featuring a unique recipe of guitar, cajon, djembe, bass guitar and keys, this band has cultivated a soundscape that’s equal parts folk and pop with a splash of rock for good measure.