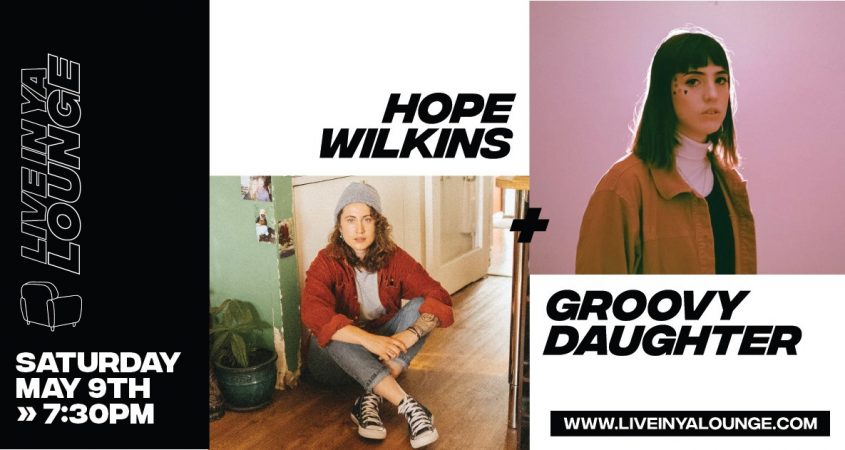 Not long ago, the plucky Rob Cartwright of EAVS (Event Audio Visual Services) touched base with BMA.

“We’ve starting to do Live Streaming Gigs in Canberra,” he said, much to my delight.

“We initially came up with the concept a few weeks ago, and ran an initial streaming concert for Hands Like Houses.”

It was a concert that attracted a healthy local and international audience of some 40,000+, with proper production and a slick, professional veneer.

“Since then,” Rob continued, “we have taken possession of a venue thanks to the help of Venues ACT, and are starting live streamed concerts.”

Happy news indeed. The hard work has been done; all YOU need do, dear reader, is log in and rock out (and, if you’re so bold, chip in).

If you haven’t yet crossed paths with this Canberra based solo act, Groovy Daughter, she’s from a long history of musical theatre and after performing her dream role decided that her passion lay in creating her own music. With heavy influence from film score composer Hans Zimmer, Groovy Daughter created an epic sound, with intense and eery orchestral soundscapes and intimate and emotional lyrics sung with a bold belt. She captured an immersive and reflective sound, an authentic ambient pop experience. Groovy Daughter debuted in 2018 with bedroom single Tyro Dreamer and has since released Reboot.

Reboot was described by BMA’s own Ruth O’Brien as, “a beautifully haunting song that, as stated by the artist “is a plea, from the deepest parts of our brain. It describes the desperation of trying to function in society when you’re plagued with mental illness.” I very much admire the candour and honesty of this young artist and look forward to hearing more of her work. Be sure to catch her live too, such a great performer!”

Groovy Daughter brings a raw set to her local scene, usually seen with just herself and her keyboard, stripping back everything to the bone. Her most notable shows include sharing the stage with Australian artists such as Thandi Phoenix, Hands Like Houses and Hot Chip. She’s also known to frequently perform among the hip hop scene of Canberra. Groovy Daughter had her festival debut on the local stage of GTM 2019 among other artists, hand chosen by ya boy Citizen Kay.

And joining Miss G Daughter will be the wonderful Hope Wilkins.

Rearing to get playing with her full band once more, Hope Wilkins has emerged out of our fair Capital with a natural talent for songwriting.

Her anthemic debut single Waste in March 2019, mesmerising audiences with a set of extraordinarily performed falsetto runs over a folk-pop melody. This captured the attention of triple j Unearthed presenters and listeners, securing her a position in the platform’s 2019 NIDA music video competition.

Since then, the indie artist has recruited three talented band members to help bring her music to life. Winning fans over with relatable catchy lyrics and dynamic performances provided her a string of shows in the city, playing alongside the likes of Greta Stanley, Hollie Col and Art vs Science.

Set a reminder so you don’t forget to tune in. It will be a great way to kick back and enjoy your Saturday night – from the comfort of home. Link!

Hope Wilkins and Groovy Daughter – Live In Ya Lounge

Stay tuned for more on the wonderful effort of Live In Ya Lounge. They’re great people doing wonderful things. As their mission statement goes:

“Live In Ya Lounge was birthed as a means for artists to deliver the live concert experience direct into peoples homes, giving the community a small piece of the normal we are used to. We may not be able to go to the pub and listen to local bands or go to see big acts that have come to town but we can bring it into your lounge room. But this isn’t just an artist at home with a smart phone streaming online. Live In Ya Lounge is a virtual concert – it’s a full production with professional audio and lighting, delivering the next best thing to attending in person.We hope that Live in Ya Lounge gives a little to improve people’s everyday lives, and experience a little of what life used to be like before COVID-19.”