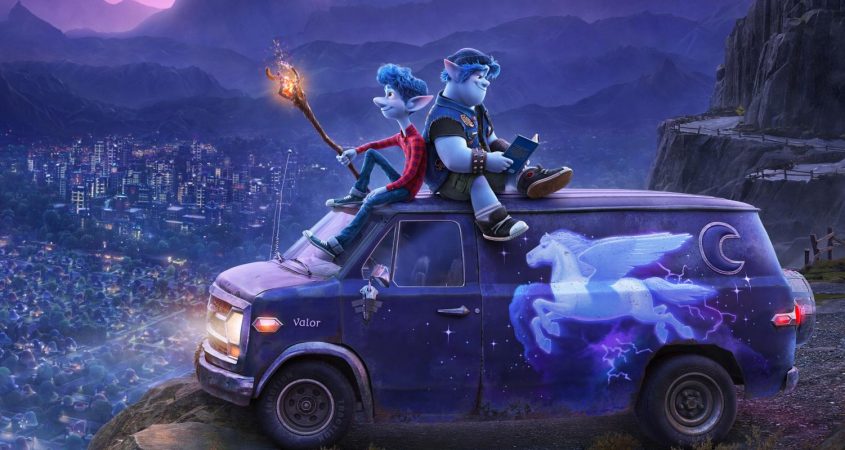 Two elves, Ian and Barley Lightfoot (Tom Holland and Chris Pratt), live in a magical kingdom that has lost its edge due to a technological revolution. Over centuries, magic is replaced by lightbulbs, cars and smartphones. Magic took effort; it’s easier to flick a switch. But before Pixar’s latest starts to lean hard into its ‘put your phone down’ mentality it adds a tale of brotherhood, coming-of-age, and a yearning for the old ways.

Onward says more about Pixar with its plot, which focuses on the Lightfoot brothers going on a quest resurrect their dead dad using a wizard’s staff. Think Field of Dreams meets Dungeons and Dragons (D&D). The ingenious simplicity of Pixar is mostly absent in Onward, and it behaves more like their stablemate Disney Animation (Frozen, Zootropolis). Disney owns a lot, so it’s vital for Pixar to carve out its own identity but Onward represents a point where it’s hard to tell the difference.

The Lightfoots’ journey is part road trip, part mythic quest. A mighty steed is replaced with a van complete with hair metal paint job. The mixture of old and new is where Onward gets inventive. Unicorns are pests feasting on garbage. Pixies roll in motorcycle gangs because they’ve forgotten how to fly. A theme restaurant run by a manticore (Octavia Spencer), a creature that’s a lion crossed with a scorpion, highlights selling out the old world the most, even though it’s another case of Pixar throwing stones from within Disney’s glass castle.

With the road trip mentality, the Lightfoots are without an antagonist and bounce from location to location with a series of run ins and a ticking clock on their dad revival spell. The brothers are pursued by their mother (Julia Louis-Dreyfus) who carries a warning about a curse that will prop up the final showdown. At times it feels like you’re in the hands of a lethargic D&D dungeon master churning through side quests. Holland sells the inadequacies of his character well while Pratt’s dude-bro enthusiasm makes you wonder why Jack Black was too busy.

Onward conjures a little wonder once it fully embraces its fantasy influences. When Ian eventually starts using his magical staff there’s a thrill to seeing the old ways remerge and the animation brings his newfound talents to life in spectacular fashion. The animation style evokes the colourful fantasy environments of World of Warcraft and the artwork from the pages of a tabletop role-playing manual.

Onward focuses on a culture losing touch with its history and the same logic applies to Pixar. For all the brotherly heart and magical spark of Onward, it’s without the ingenuity we’ve come to expect from the iconic studio.

Onward is out now on streaming services such as Telstra+.