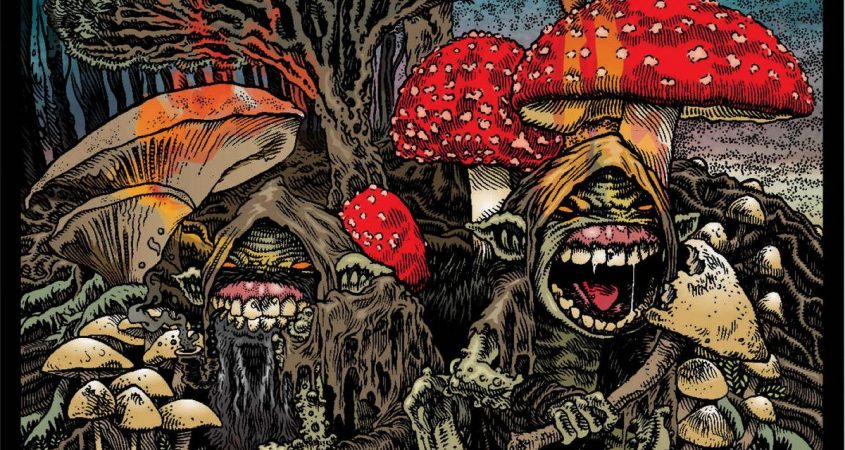 Canberra’s purveyors of post-doom metal have just dropped Derek, the follow-up to 2018’s two-track EP Akuma Kin. The new album is a thunderously monolithic slice of sludge rock that is sure to reaffirm their position as one of the country’s most striking indie acts working in the metal genre.

Opening with the ominous strains of Ball Shaker, a medium-paced track whose rhythmic countenances are akin to a sledgehammer falling through the air, this first track previews the tension, volume, and subsonic machinations that never let up, providing a veritable onslaught on the tympanic membrane—that’s the technical term for eardrum—and this membrane gets a thorough beating due to Lucifungus’ sharp aim.

The album is focused and, of course, relentlessly heavy, containing a mix of instrumental tracks and those that feature vocals. One of these is stand-out, Burn The World. It kicks off with a Sabbath-like sinisterly guitar riff that acts as a forewarning of the beastly rhythmic undulations about to happen. It takes a while for the vocal to appear, after the prelude of riffs and trampling drums are well and truly established, but when they do, the voice is wedged low into the mix, as if through a crack in a slab of razed concrete. And the first words that escape through the rubble, between the low slung percussive heartbeat and the razor-blade distortion are: ‘We can’t control ourselves, this is not where I want to be’.

It’s a fitting start to the disconsolate soundtrack that awaits. And the rest of the album as a whole.

Stark yet dense with apocalyptic tones and tremors that initiate a kind of stubborn inertia, fierce and unforgiving, Derek forgoes the trappings and tricks of a three-minute rock tune to create a forceful, inflexible style that is as powerful as anything these guys have released before.

Viewed as a singular entity Derek is a weighty introduction to the band, and to the initiated, confirmation of their burgeoning firepower. The duo’s resolute artistic designs are admirable, and when combined with a refined and felicitous production they fulfil that intention with as much confidence as a predator enjoying a night’s kill.

Support the band; listen and buy at https://lucifungus.bandcamp.com/