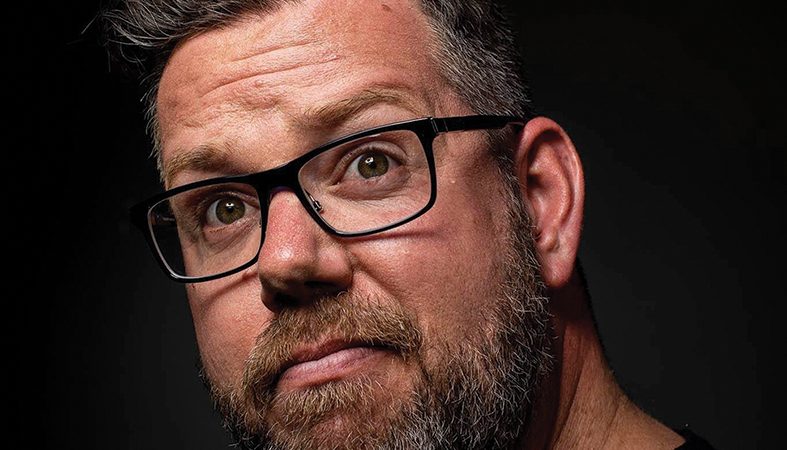 [FRANKE McNAIR]  Your show… Give us a bloody run down.

There have been many many times in my life when I would do something dumb and someone (usually Mum) would say, ‘What what going on in your head?’ So the show is kind of about that. It’s about what goes on in there in certain situations which I find myself in with annoying regularity.

Your show is called Head; do you feel like you’ve alienated audience members without heads?

I know, it’s a pretty blatant attempt to find the most basic of common ground with other humans isn’t it? ‘Do you have a head? ME TOO! This must be the show for you!’

But you’re right, I’ll have to do some target marketing to single cell organisms like sponges or amoeba to make sure I don’t miss out on that sweet sweet ocean caaash.

I’ve always had a fairly prominent melon to the point where my brothers gave me the nickname Head Grog Grog Wog when I was growing up. I’m still not sure what it means or why “Grog” is prominent enough to be repeated, but having that name yelled at you like a drill sergeant probably has a bit to do with being the way I am.

My first gig was at an open mic at The Front Café and Gallery in Lyneham just over ten years ago and it was great. The Front is such a warm, welcoming crowd and it’s probably the reason I’m still doing it because my second gig sucked. It was the very next night at a workshop performance after I had completed a four-week comedy course. I was on a high after doing okay at The Front and so I got cocky and tried to improvise and it boy did it not work at all. Also, my Dad heckled the MC (and teacher of the class) and got a bigger laugh than I did in my five-minute set. Thanks Dad.

My most recent gig was the Civic Pub Comedy Club Christmas Show which is probably my favourite show in my favourite room. The CP is usually a standard show format: headliner, MC and supports. But the Christmas Show has a showcase of great Canberra comics just letting loose. It’s always packed and the crowd is really close to the stage and always up for it so it’s an awesome night. Everyone on that line-up absolutely smashed it and it demonstrates that there is a heap of talent in the Canberra comedy scene.

The Civic Pub is the longest continuously running comedy room in Canberra and they continually get the best acts from around Australia (and lately some overseas ones too).

They have worked so hard at building their room that punters come along regardless of if they know the headliner or not, because they know they are guaranteed a night of elite level comedy.

That’s a good question. My first reaction is to say creating content, because I find it really hard to find a routine or rhythm to sit down and regularly work on material. When you have material that you have worked on and refined and are confident in, performing becomes much easier and if you’re really in your groove it let’s you really let go and have fun. But there’s a lot of work that has to go into that before you get there, and it’s often hard for me to get started.

All that being said, there’s no worse feeling than having a bad gig. So I should probably turn the cricket off.

Laughter. There’s nothing better than it. It’s genuinely therapeutic; it releases stress and increases the level of endorphins in the brain. With little kids these days I don’t get the chance to go to as many gigs as I used to as a punter, but I always lock in and engage with other acts that I’m on a line-up with because it’s my chance to have a good laugh too.

The Canberra Comedy Festival has been growing every year and it is so good to see so many people at the shows.

But there is comedy in Canberra all year round, from open mic to professional standard shows. I would love to see the success of the festival transfer more to the local scene, because there is no down side. More people at shows means that the comics, the material, and the shows get better; more rooms open up and local businesses do better.

So come to the festival, but then the week after come to The Front or the Civic Pub or any other of the rooms across Canberra and help build the local scene.

I’m a story-teller, so my style is better suited to a longer-form. I like to be pretty honest in my shows, they are usually pretty personal and the material is always based on real personal experience. I think people will have a great night, and a lot of laughs and maybe learn a few surprising things too. It’s on Friday, 18 March at The Street Theatre.