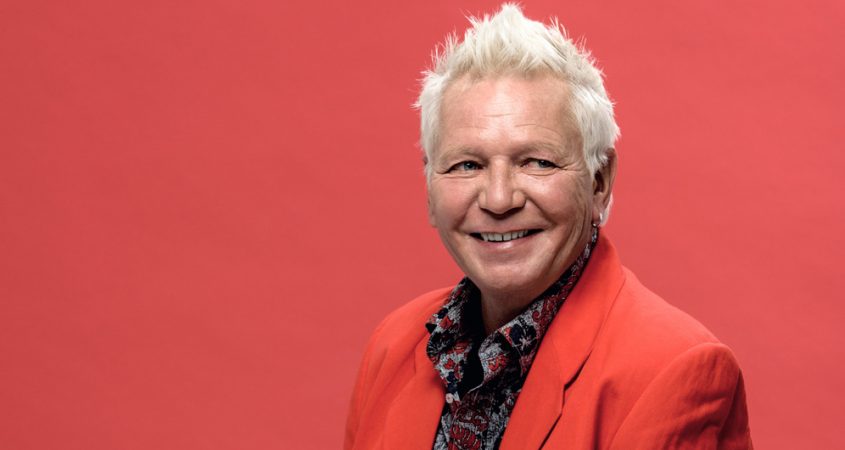 I’m going to have to break tradition and present this in the first person. For me, speaking with one of Australia’s most iconic vocalists, and my personal favorite band as a kid, is something that I have to relay as a story not a report.

I have distinct memories of it being 1987 and my mate Paul and I sharing Walkman headphones while we listened to Man of Colors on repeat. We knew every note and every word.

Fast forward 32 years and I find myself sharing news that I was about to interview Iva Davies. I put out a post and it turns out pretty much everyone I know has a certain love for Icehouse. Bands that have done covers, people who have kept vinyls and cassettes, people with memories of seeing the band or memories that formed with an Icehouse song as the soundtrack.

According to Davies himself, “I worked out that at one point, Man of Colours was in one out of every four households in Australia; that’s how many it sold”.

Speaking with Davies via phone, we begin by discussing what the band has been up to.

“We’ve been doing quite a bit actually,” Davies chirps. “We’re starting to wind up a bit because we got quite a few shows between now and May including New Zealand so that’ll be kind of busy.”

Since there has not been any new material out recently, I asked Davies to explain the motivation behind the tour.

“It’s based on the fact that we basically kind of stopped playing completely in 1993 and it was our tour manager who had the idea for, and initiated, the whole Sound Relief set of concerts in 2009. He dobbed us in without actually asking me. He rang me and said, ‘Oh, by the way, you’re headlining Sydney’ and I said, ‘are you insane?’ We hadn’t played in 16 years, but it was great fun.”

An observation from the interview is that it seems Davies considers himself attached to a very accomplished band of musicians. He speaks of his bandmates almost as if it were his voice attached to their music. There have been around 24 musicians credited with contributions to Icehouse.

“The interesting thing is these guys are all working musicians so this band is their main thing,” Davies explains. “They all have other musical jobs and a number of them are lecturers. They all play with other ensembles and that’s what they love to do. These guys have been doing it a long time because they love doing it. I guess I was the one saying nup, nup, nup but as soon as I said maybe they jumped on it.

“We don’t live the same city,” Davies continues. “We’re split between Melbourne and Sydney so there’s no social opportunity other than when we play, which is possibly not a bad thing. It is special when we eventually end up in the same spot, in the same hotel, in the same city. It’s great fun.”

After not playing together for so long, I wondered if they fell back into their groove easily. Again, showing his obvious admiration for his band, Davies replies:

“The thing is we don’t rehearse a lot. We just went through a series of rehearsals about a week and a half ago because we did two shows in Melbourne the previous weekend and did some rehearsals before that but, I mean, they’re incredibly fine musicians. These guys do their homework and they don’t mess up; they’re really sharp.”

On being asked how their recent shows have been received Davies explains:

“We’re actually playing to more people now than we were previously. What struck me is the longevity of the catalogue. When I was writing those songs, it was out of survival desperation. Once you’ve signed a record contract and you’re obliged to keep going and putting out new albums and so on, it really was like running to catch up the whole time. The last thing on my mind would have been: is anybody going to remember these songs in 10 years’ time or 20 years’ time or 30 years’ time or even 40 years’ time? It was a thought that simply just never occurred to me.

“It’s amazing to be in the position that we’re in now where we go and do shows to thousands of people who actually know all the lyrics and know these songs, and some of them have been incredibly young. It’s obviously gone down a couple of generations and that’s kind of mind-blowing, really.”

“What’s fantastic about the internet is that people of my son’s generation – he’s 23 – have the ability to go back and discover absolutely anything they want to including the ’60s and the ’70s. I think if I was to pin down his taste I would say the late ’60s and ’70s is his thing, which is interesting for a 23 year-old.

“By contrast, I can remember myself at 23; I never really collected albums. Just getting out of high school, I literally only had three or four albums because they were expensive. When Double J arrived that was a lifesaver. I can remember literally sitting on the floor listening to Double J because that was such a source of great, interesting, new music and I couldn’t afford to buy any so Double J was the internet of the day.”

As a band who achieved fame before the internet, as well as not being overly active throughout its inception, it’s not a surprise that there’s not a lot of social media surrounding Icehouse. That’s where Spellbound comes in. Davies explains:

“In the early-to-mid-’80s an amateur fan club popped up in the United States and it turned into a fairly serious operation. It really took off with that period of Measure For Measure and Man Of Colours and we had a lot of success in the United States.

“Since that time, we’ve developed a relationship with the two women who started it. Spellbound is quite an important official fan club that’s run out of America. It’s more than a fan club too. Kristen and Cheryl who are the women involved, they administrate a lot of stuff for us as well. They’ve become an integral part of the team.”

My final question referred to the possibility of new music, and while Davies answered by leaning towards a no, the question spurred a personal insight.

“When we were touring back in the Man of Colors days, I was kind of a gym junkie,” Davies reveals. “It was for self-preservation. It started up in America where I nearly fell apart in completely; it was such a big tour. I had a minder then because I couldn’t go anywhere. He was one of the top fifteen kickboxing champions in the world and he was a tank of a man, a body builder. He actually went to our management and said, ‘Iva’s gonna completely fall apart if he doesn’t get some time to himself’.

So then, in my schedule, they insisted that I have two hours every day where I had to go to the gym. And I did. He trained me over 14 months and I was incredibly fit. He kind of saved my life in a weird way because I don’t know what would’ve happened if I had not been able to get that break every day.”

This is usually the point where I say something like, ‘If you haven’t heard these guys, check them out’. But this is Icehouse. You have heard them, you do know their music, and from what I can gather, they’re a significant part of most people’s musical journey.

Happily, Icehouse are out on tour again, part of which sees them hit Canberra for the Anthems Music Festival on Saturday, 28 March. The Anthems promoters will be showing their gratitude to our firefighters, and the hard work and sacrifices that have made in the recent months. To show this they are offering all local and interstate firefighters, registered volunteers and associated emergency workers free entry to Anthems. Anthems will be a great local event, bringing together the community for a night of music, fun, and cheer.

Support Jeremy Edwards on Patreon!
9% complete
When we reach $500 per month we will begin the official BMA Podcast. This will include interviews with some well-known musicians and artists, tips and tricks for publishing in print and online, as well as other discussion topics around Bands, Music and Arts in Canberra!