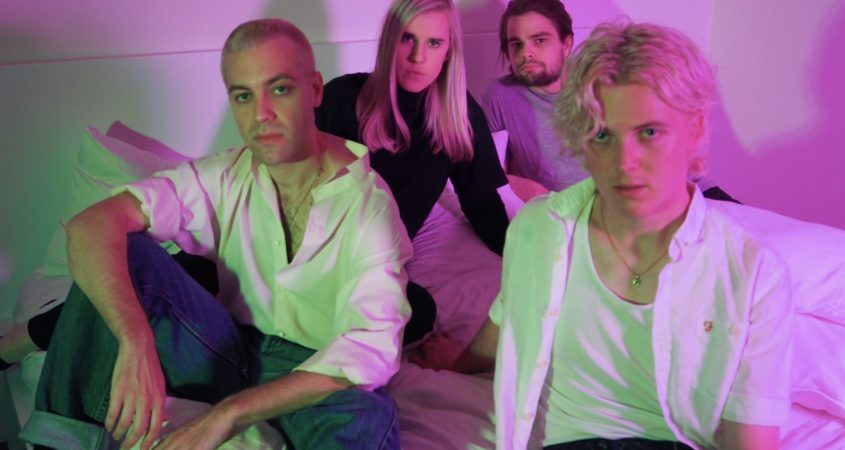 As punters danced under the stars, enjoying the view of glowing Telstra Tower in the background, the crowd was reminded of the dynamic range of artists that the Australian music industry has to offer. The line-up presented a blend of genres, mixing hip-hop, pop, indie rock, and electronic music.

While the line-up was well curated, it lacked a local touch. This was disappointing given the range of local talent on display at the university earlier in the week at Warm Water’s First Nation Fire Relief concert with local legends ARCHIE, Smart Casual and Liv Li. This meant for a seemingly missed opportunity for new Canberra Uni residents to be exposed to the wide range of musical talent that our town has to offer.

They were, however, able to find a place for Canberra talent on the food line-up. In addition to tunes and bevs, the mini festival had a range of food stalls on offer including Canberra faves Grease Monkey and Hello Hanoi.

The party kicked off in the late afternoon with Hayley Mary, Adrian Eagle, and Remi getting the good vibes flowing. It was a slow start to the day as a relatively small, somewhat disengaged crowd gathered. The majority of punters sat around on hay bales drinking and chatting, while a small mosh formed in front of the stage.

As the fashionably late crowd rolled in and the event kicked into full swing, Wafia’s dynamic stage performance and catalogue of top hits won the audience’s heart. Wafia is a force to be reckoned with and a powerful woman in the Australian music industry.

The icon played a range of her most well-loved songs including her funky collab with Louis the Child Better Not and her break-up anthem I’m Good.  The superstar even treated her crowd to a cover of Justin Timberlake’s Mirrors.

In between sets, a DJ played in the corner of the stage changing things up with a mix of techno and house tunes. Next up to the stage were triple j faves Holy Holy.

The band played a catalogue of tracks off their 2019 album My Own Pool of Light, opening with the first song on the album, Maybe You Know. Their stage presence was humorous and engaging. They made jokes about it being their first year at university and asked questions about what stalls the event had.

At around the half-way mark of their set, front man Timothy Carroll jokingly commented on the crowd’s lack of engagement claiming, “Hopefully you guys will know the lyrics to this one”.

Their 2019 Like A Version of Lorde’s Green Light sent the crowd into a frenzy as it proved to be the song that most punters knew the lyrics to.

Disappointingly, Holy Holy was cut off early and were not able to play their final and most anticipated song, Teach Me About Dying.

Another break between sets saw punters racing to the bar to stock up on drinks before the mosh formed again in anticipation for first time festival headliners, Cub Sport.

Cub Sport’s performance transformed its audience into a dreamy electro-pop universe. Capturing the crowds undivided attention, the band presented an immersive performance with textured layers of sounds and vocals.

The electro-pop outfit opened with crowd favourite Chasin’, then deep dived into tracks from their 2019 self-titled album Cub Sport.

Lead signer Tim Nelson’s vocal range was out of this world and completely captivated the audience. On stage he used two microphones, each allowing his vocals to reach new limits of high and low sounds, creating a stage presence like no other.

Cub Sport were raw and emotional, proving simply why the band has such a loyal and dedicated fan base.

A love story well known to fans is the romance of band members Tim Nelson and Sam ‘Bolan’ Netterfield.  In an intimate moment during Party Pill, a track which Tim actually sung at their wedding registry, the chemistry between the two became apparent. Tim lovingly looked into Bolan’s eyes and sung the lyrics, “I think I’m gonna love you for a long time”.

The band presented a unique take on pop music, blending dynamic, deep synthesizes with dreamy guitar riffs and personal heartfelt lyrics. This made for a memorable and unique audience experience. Cub Sport closed the set with their Hottest 100 of the Decade contender, Come On Mess Me Up. The emotional tune was the perfect note to end the night on, providing one last sing-along for the crowd.

The stage and overall set up of the event worked extremely well, with vibrant stage lighting, plenty of seating options and areas to relax, and even light-up hula hoops to play with courtesy of ANU sport.

ANUSA’s Friday Night Party proved to be one to write home about. The dynamic line-up, overall relaxed vibe, large open area, and abundance of stalls made for a dreamy evening underneath the stars.