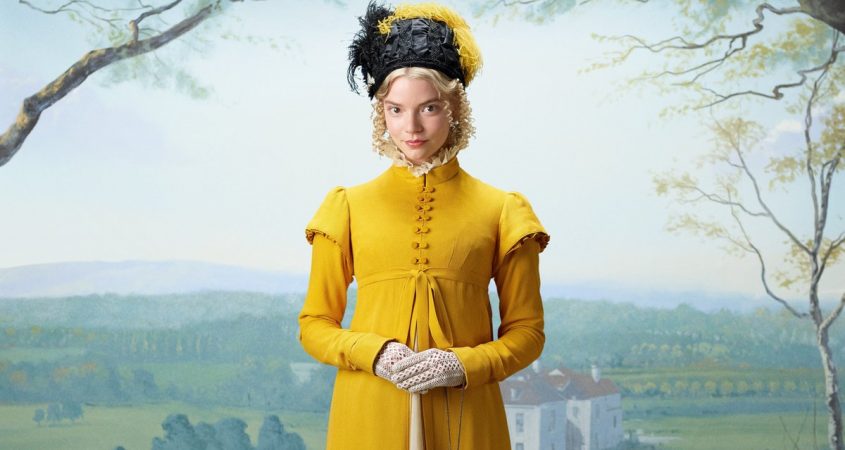 Jane Austen’s beloved novel Emma, published in 1815, is once again brought to the screen, this time by screenwriter Eleanor Catton and director Autumn de Wilde.

Emma tells the tale of Miss Emma Woodhouse, a handsome and privileged young woman who, fancying herself a gifted matchmaker, meddles in the lives of others, to disastrous effect.

Regrettably, Anya Taylor-Joy’s Emma inspires neither interest nor sympathy.  Although Austen wrote the character as someone no one else would like, she did not create the self-absorbed, snobbish, unpleasant Emma in this film.  Austen’s Emma is spoilt and naïve, with much to learn, but is also sparkling and redeemable with an essentially good heart.

As well, Taylor-Joy and Flynn convey no sense of a romantic connection, making for an unbelievable romantic relationship — which the film’s direction led to occur abruptly rather than via gradual transitions.  Emma is a spoilt and silly woman one moment, and a humbly mature one in the next, and Mr Knightley unaccountably falls in love during a single dance with a woman whose faults and limitations have vexed him for years.

These and several other glaring omissions unfortunately create motivational vacuums, the film’s various threads eventually squeezing out an uncomfortable resolution and forfeiting overall success.  The departures arising from Catton’s screenplay and de Wilde’s direction failed not only to bring anything refreshing to Austen’s Emma, but also to make best use of the tact and subtlety so integral to the novel.  The production is nonetheless largely rescued by the way in which its exquisite sets; splendid, lush costuming; fine cinematography; and many likeable characters bring Regency England superbly to life.