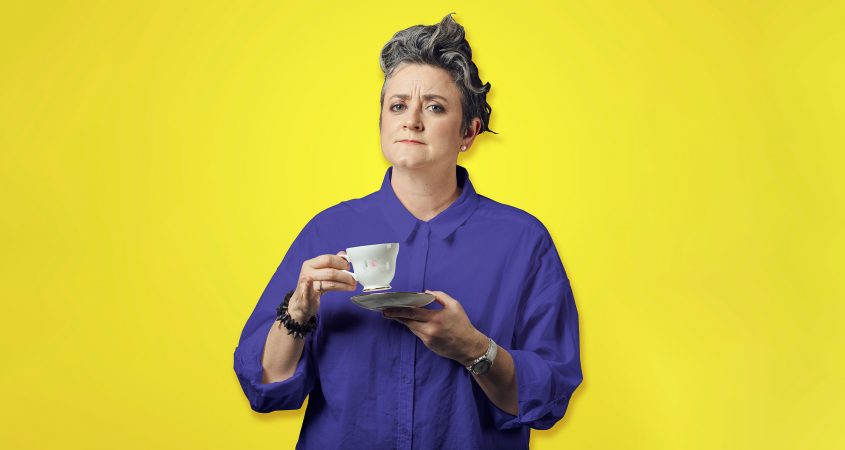 Frankie McNair and Chris Ryan are two Canberra comedy champions doing wonderful things both here, and interstate. The Canberra Comedy Festival sees new sets from both in March, but here, right now, sees the former (Frankie, you’ll remember) interviewing the latter (Chris Ryan, do keep up) about her new show.

[FRANKE McNAIR]  Your show… Give us a bloody run down.

[CHRIS RYAN] I don’t think I’m alone in feeling somewhat devastated by 2020 so far, but instead of becoming a Zen Master or trying to win the World’s Most Ethical Consumer award, I’m panning through soot and hailstones for the glimmers of comedy gold.

My new show scans my worry landscape which includes such items as the moral imperative to be grateful, the cost vs benefit of keeping up appearances, and whether being right is much chop. Incidentally, how society has expected parents (who are blatantly unqualified for the most important job in the world) to know what they are doing is beyond me. I will try and put that in some order that makes sense to me and tell people about it.

Why are you excited about doing your show?

I’ll be as excited as anyone to see the show because I don’t even know what’s in it yet, so it will be a fun surprise for all of us. At least by doing it, it gets done, and I have one less thing on my To Do list. Plus I get to see people afterwards and it feels like I have more friends than I do in real life.

Have you always wanted to do comedy?

When I was eight I wanted to be a flight attendant (although in the ‘70s we called them air hostesses) because they seemed so nice and they looked happy.

Further research has suggested I may have been wrong about those things and I would totally suck at being nice for a long time in the air even if I am being paid for it.

In Year 9, I decided to become a journalist after following a photographer around for work experience at The Canberra Times. That panned out for a while, then at about 25, I wanted to try stand-up but I had to wait until I was 38 before I had anything to say.

What d’ya do to help yourself when you don’t feel inspired?

When I feel as interesting as an old shopping list, I avoid social media or watching comedy because those things make me want to dig a large hole and hide in it forever. Usually, what works is I drink too much tea, go for long walks and listen to poignant music from my early 20s like some bereft lover. Eventually I get sick of that and comedy becomes an option again.

Apple, orange, banana. Which one and why?

Just quietly, I’m not that into fruit, even though I know you’re supposed to be. The banana is closer to desert than any of the others and can be made into cake and smoothies that are delicious, so, banana, if I must.

Driving to a gig at 8pm when you’d rather be in bed only to forget what you wanted to say, have a bad set, decide you should not do comedy anymore then having to turn around and drive back home.

When you meet new people, they think you’re interesting and exciting if you tell them you do comedy even though you are actually neurotic and sedentary and, if I’m honest, kind of uptight and confused.

If you accidentally get some olive oil onto a t-shirt because someone (possibly you) left the lid off and you clumsily catch it in your boobs, you can just drip some dishwashing liquid onto it, rub for a bit, and leave it for five minutes before rinsing it under warm water and it’s as good as new. I Googled that so you didn’t have to, by the way. You’re welcome.

Chris Ryan’s new comedy show I Thought It Would Be Nice is at the Courtyard Theatre, Canberra Theatre Centre on Friday,  20 March and Saturday, 21 March at 7.15pm. Tix are $25 + bf from https://canberratheatrecentre.com.au/show/chris-ryan/