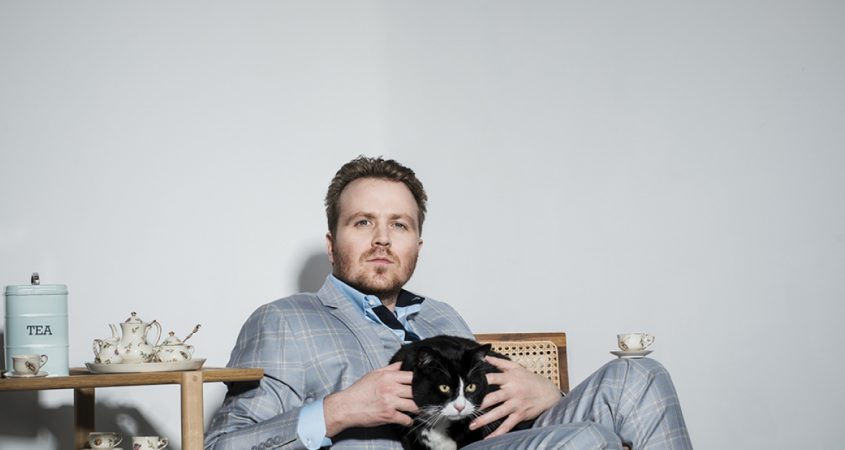 Gareth Reynolds – master of impressions, icon of improvisation, Arrested Development writer, and one half of super-popular The Dollop podcast/live show alongside Dave Anthony – is heading our way for a very special standup show to support his first ever comedy release, Riddled With Disease.

Indeed, as the article title apes, Gareth is the man on the show “who has no idea what the topic is going to be about,” a phrase as iconic as it is grammatically awkward. As with most things, there’s a story behind it.

“There’s this guy called Steve who works at iTunes who’s been very great to us; he was the one who suggested we should do a quick intro,” Gareth reveals. “So right before the show one day, we’re like, ‘Oh right, we should really do one of those now. What should we say?’ And literally we said it real quick and just locked it in. And Dave refuses to change it. Although I think one time I did it different and Dave said, ‘No-no-no. Don’t change it. Fuck those people.’”

As a big fan of both The Dollop and Gareth, and having enjoyed a lively interview with Dave Anthony some years ago, I was keen for an in-depth chat. The man is every bit as lovely as you’d hope.

It seems Gareth has ended his decade with a spot of self-improvement. Last time I had the pleasure of a brief face-to-face chat with the man was following a previous Canberra Dollop show where The G Man was vaping like a champion.

“I’ve since quit that,” he says, in that o-so familiar voice of his. “I don’t think anyone knows what it is. I also couldn’t do too much standup with that; it was to hard on the crowd. I couldn’t use my voice in the same way I wanted to.”

And you certainly wouldn’t want to go messing with that voice; an instrument that houses the lives of untold numbers of fully-formed characters and scenarios, as Gareth proves week-in, week-out on The Dollop as Dave Anthony reads a (crazy) story from American history, and Gareth brings it to life.

It’s a wonderful attribute, so I wondered if there was a time early in Gareth’s life when he realised this ability.

“That’s a good question,” Gareth ponders. “As a kid being around different accents, I just gravitated toward being able to do that. Just kind of mimic people. And I guess when I started doing improv, it’s such an easy way to create weird characters, or be set up as someone who’s really weird, or different, or whatever, y’know? So your mind goes toward character stuff.

“But the only time I’ve been reflective on it is when I’ve done podcasts. With standup you tend to be you, but with the podcast there’s such a rich ground for making up what people sounded like. It’s just a perfect place to create that. When you think of actual improv, in theatres and such, that is really the only place you can do that. So the podcast has that improv element, which is my background.”

The Dollop has greatly elevated Gareth’s renown, and it seems good fortune can be thanked for it. Dave’s original concept for The Dollop was for a rotating cast of guest comedians to take up the role Gareth is now cemented in. But they clicked so well straightaway that thoughts of anyone but Gareth were preposterous.

“Yeah, to think about the luck of that,” Gareth regales. “The timing was just so random and I think we both appreciate it. Dave has been a guy that not only has given me a great platform but in many ways is just a really good friend. Just a great dude.”

Gareth lets out a small self-knowing chuckle before he continues.

“But I think people see him on Twitter and think, ‘Is this guy out of his mind?’ He isn’t. He’s – what I think a lot of people are now – pissed off at the way things are. But person to person, Dave is a really sweet dude.”

“Again, the randomness about the lack of knowledge I have about history; it’s very lucky!” he laughs. “All those times those teachers were telling me to study, knuckle down, and get my shit together, I would have been fucking myself.”

A revelation that arises upon talking about characters and accents that Gareth creates is his complete lack of memory about them. I mention one of my favourite episodes, The New Jersey Shark Attacks with My Favourite Murder’s Georgia Hardstark and Karen Kilgariff joining in, where Gareth creates an amazingly entertaining hotel manager character in extreme denial against the chaos erupting around him.

“I can’t even remember what you’re talking about,” Gareth flatly states. “That’s the beauty of it. It’s like improv too. You do it, then forget about it. Someone said at a show the other night, ‘I love your impression of the womb…’ And I’m like, ‘The womb? I have an impression of the womb?!?’ She’s like yeah, you did the womb when we were doing an episode, probably about repression of women. So she did the impression, and I’m like, ‘OK; I think I know how I would have done it,’ so I do it, and she goes, ‘THAT’S THE WOMB!’”

Despite this lack of recollection, I ask Gareth if there are particular people/characters over the huge 411 episodes that he loves.

“Ones that jump out to me immediately are ones like Jocko from The Boston Marathon. When Dave was giving me the details of this guy I was like, well how am I not going to go apeshit? I love doing a Scottish accent, and he was just a lunatic! [Unlike other irredeemable characters] He had a consciousness breakthrough. People in the middle need to see what’s wrong about the wrong side and be shocked out of it.

“It’s funny, because we recorded that episode at my house; just two dudes. And at the end Dave is like, ‘Aaaaaaright buddy; I’m going to get going’. But in your head you’re thinking, ‘I’m pretty sure that was fucking hilarious’. But you never know what’s going to happen, and that’s the beauty.

“And when we did Ross Perot. I knew Ross Perot, when he was a kid, so I knew what he sounded like, and the character was so clearly in my head. And the truth is the impression probably wasn’t nearly what he sounds like, but it is just fun, y’know?”

It’s clear Gareth has a love of doing particular accents; the aforementioned Scottish, and he also seems to revel in Irish. But how exactly does one go about creating an impression/accent?

“I mean yeah, it’s a hard thing to quantify,” Gareth says. “The way my mind comedically works, it’s a combination of it being fun to do and… I dunno. Sometimes you hear details about someone, and you picture them, and so I picture their voice too. And I’m very comfortable being a lunatic! Being laughed at on the show is maybe the wrong move comedically, but whatever.”

Talk turns from The Dollop to Gareth’s solo standup endeavour, and his debut comedy album to boot.

“Yeah. I’m very excited,” he says. “The truth is, tickets sales have been really good. We were seeing how it would shape up and go from there. But it’s gone well! So I’m very excited, and very happy.

“The album is called Riddled With Disease which is a reference to wildlife. I’ve been doing standup for AGES but this is my first album. I’d been a feature [opener] for friends of mine on the road for awhile; a lot of standup is earning your way up. So, through this and doing The Dollop, I was able to get more headlining gigs. Once I had that opportunity, I realised I could really refine it and put it all together.

“I spent about five months really intensely going on the road and working on it, then culminating and recording it. And it is strange, because you’re never really done with a joke; you can always find something else with it. But I got to a point where I was really happy with it, and let it rip.”

How does one go about distilling a lifetime of standup into a one-hour album? Is there a point to prove or a theme to explore?

“I’ve worked on it for awhile, so there’s no theme; it’s not a one-man show or anything that like. It’s putting together chunks of material from over the years, and recent stuff too; a lot of it is very new. But just working on getting those chunks together.

“I think going forward, my mind gravitates more toward what you’re talking about?” Gareth muses. “But even then, when I look at the stuff I have in my notes that I want to work on, there are some that I’m like, ‘That’s a really good point’. But there are others where I just want to do really good jokes.”

I speak of the joy of discovering material written long ago and being pleased and surprised by it.

“One of the things about going on the road and hammering the same hour is that you don’t try anything new,” Gareth says. “And then you record it all and suddenly everything is new! Because you’ve had some time to work on new stuff; there’s stuff you think is great, and an audience confirms that, and others that you think, ‘Why is this not working?’ So I’m definitely right back in the thick of the process.

“I feel invigorated by doing that, which is why I’m really excited about coming to Australia.”

And we’re excited to have him! Thanks to Comedy ACT, Gareth Reynolds will appear at the Big Band Room at the ANU School of Music on Wednesday, January 29 @ 7:30 pm – 9:30 pm. Tickets are $40 and are available from https://www.trybooking.com/book/event?eid=571725&