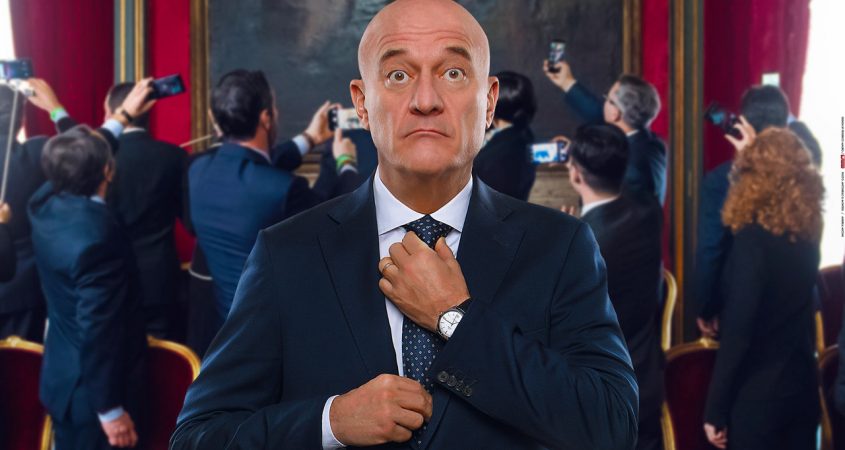 Four months after Italy’s national elections, two coalitions of minority parties finally compromise enough to form government — but neither coalition leader is willing to take second place to the other as prime minister. The stalemate’s resolution comes through the brainwave of using an obvious puppet. Eight years earlier, Peppino Garibaldo was accidentally elected president for a few months (Welcome Mr President, 2013). The republic’s current president suggests Garibaldo as a suitable prime minister for the interim. Garibaldo’s nature is enthusiastically rustic, though: his natural proclivity lies more toward fishing near the country log cabin he swept his new wife, Janis, into at the end of his presidential term.

Garibaldo is faced with challenges on a more personal note, though, when his wife takes their precocious daughter, Guevara, and leaves him for her old job as the president’s aide. Rising to the challenge to win her back, Garibaldo accepts the challenge of prime-ministership. And so begins a hugely enjoyable tale of methodical madness in which Garibaldo eventually challenges an entire nation’s people either to live with the implications of a cleanup of government corruption or else live with the consequences of continuing to refuse to pay their own taxes.

Set largely in a strikingly elegant presidential palace and beautifully shot, the film’s comic effectiveness, though it enjoys its share of physical comedy, relies less on buffoonery than on the joy of seeing the deserving get their comeuppance through a combination of well-intended swindling, all-too-human failure, and a delightful foray into the world of high-tech espionage. Starring a cast of appealing actors, including Sarah Felberbaum (replacing Kasia Smutniak), as Janis; newcomer Roberta Volponi, as the precocious Guevera; Antonio Petrocelli, as the current president; and Claudio Bisio, as the always completely likeable Peppino Garibaldo, the film is a delight from beginning to end.