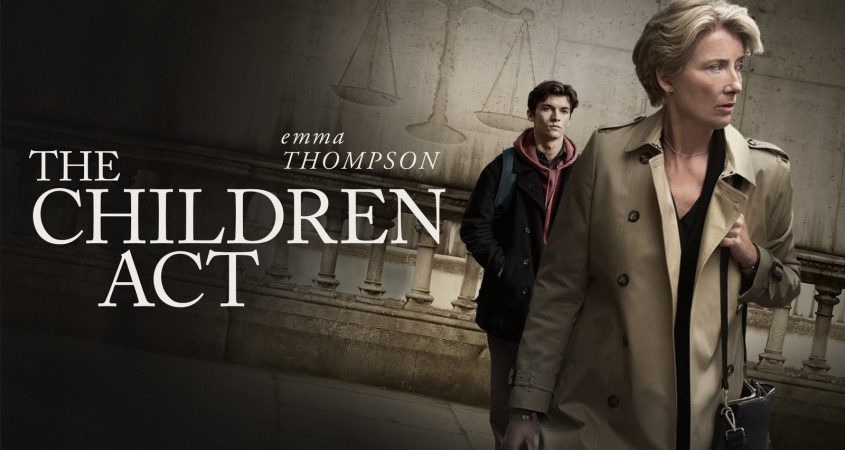 Presenting acting every bit as solid and believable as you’d expect of them, Emma Thompson and Stanley Tucci play a couple, Judge Fiona Maye and her husband, Jack, whose marriage has been labouring for some years under the heavy workload of Maye’s judicial duties, out-of-hours sessions often leaving her little time for intimacies. Maye is capable of taking tough decisions that, though they may look wrong, meet the letter and spirit of the law, which provides that in medical decisions the child’s welfare should be the paramount guide.

But when 17-year-old Adam Henry (Fionn Whitehead), a Jehovah’s Witness, refuses a blood transfusion that may let him survive aggressive leukaemia treatment, Maye realises that she must meet the young almost-adult in order to finely balance his (possible) future against his right to self-determination.

The interactions of several strong characters, rather than a particularly complex plot, combine with realism in medical outcomes to make this movie interesting and eventually very moving. Feature film being a storytelling medium holding the potential to entrance, captivate, and move us through a large range of emotional and thoughtful responses, it’s surprising that such power imbues so few of the thousands of features produced every year. Of those that do, though, many come from Britain, and amongst them certainly is The Children Act, its classic attention to lighting, viewpoint, sound quality, and camera technique and beautiful integration of mood, attitude, gesture, speech, action, and meaning rendering it a very satisfying if poignant reminder of the frailties in us all.