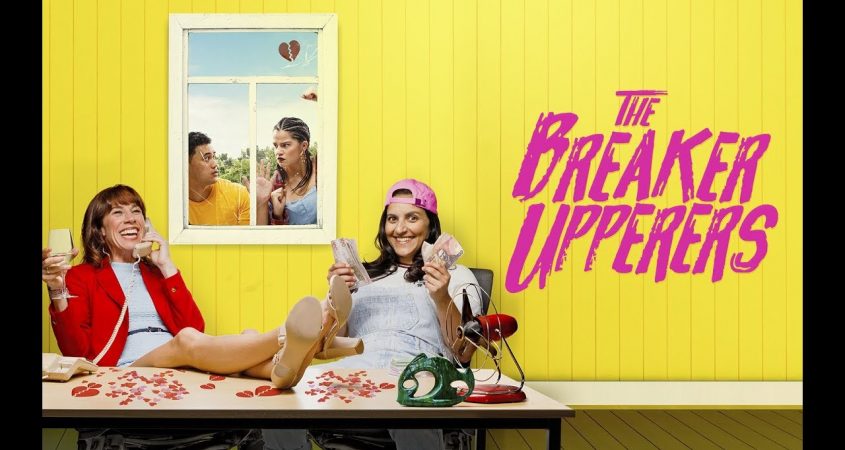 At the beginning of this movie, we meet two young women and see them in a quick succession of all kinds of stunts in order to break couples up upon request (and payment) either by one of the couple’s members or by some other interested party. It makes a great introduction to their service and sets the mood of the movie from the outset with its distinctively Kiwi brand of outrageous humour.

The Breaker-Upperers is another in a series of recent New Zealand offerings rife with gentle but deft, almost painfully funny, Kiwi self-mockery. The involvement of Taika Waititi’s production company hadn’t given it quite the sophistication of his style of humour, whose evident good nature arises from a deep sympathy with those he pokes fun at as much as it does from any wish to expose human silliness; nonetheless the laughs here arise from our human natures rather than from misfortune or artificial awkwardness as they do in so many movies from the largest studios.

Madeleine Sami (Boy; What We Do in the Shadows), as Mel, and Jackie van Beek (What We Do in the Shadows), as Jen, together constituting the Breaker-Upperers team, present likeable but contrasting characters who, whilst accepting each other’s very different life philosophies, serve as excellent foils for each other. Gradually the basis of their friendship, and its ultimate strength, comes to the fore, and the power of love and forgiveness is presented in typically quirky Kiwi style. Its single weakness lies in undue character distortion in order to meet plotting requirements: the leads’ characters’ roles in creating and mending a rift between them simply don’t fit their previous behaviour.

James Rolleston, as Jordan, displays his great versatility as an actor in a role that couldn’t be more different from those he played in The Dark Horse and The Deadlands. Other notably delightful performances include those of Celia Pacquola (“Utopia”), in her first feature-film role, as the miserable Anna; Rima Te Wiata (Hunt for the Wilderpeople), as Jen’s mother; and an endearing cameo by Jermaine Clement (“Flight of the Conchords”; What We Do in the Shadows).

Bring to it a broad-minded sense of humour, and you’ll find this movie a lot of fun.