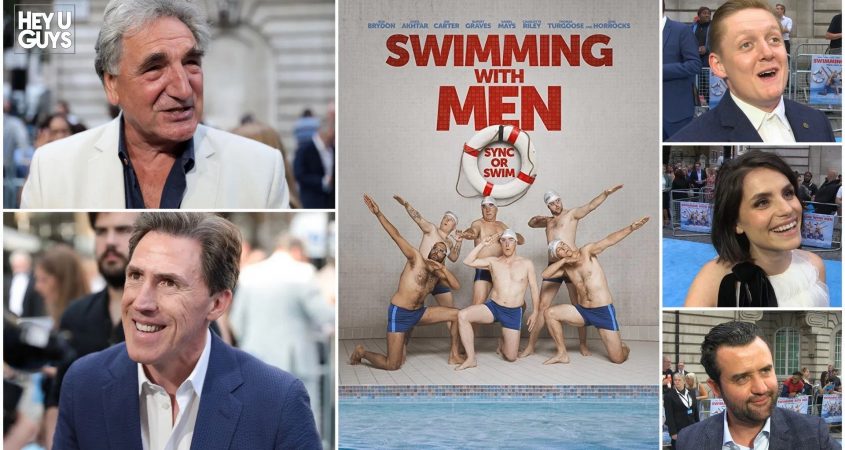 Rob Bryden stars in Swimming With Men as Eric, a jaded accountant ready to jump out of his rut both at work and at home. When Eric encounters men in a synchronised-swimming team struggling to perform a particular manoeuvre, he mentions to them the mathematical solution to their problem, and they invite him to join the team, setting him on a new creative path. When every team member subsequently accepts an unofficial challenge to compete in the Unofficial World Male Synchronised-Swimming Championships, the stage is set for rigorous training to overcome the odds.

Bryden’s characteristic wryness of face as well as of speech is joined here by an ability to convey the joylessness and the newfound hopes of a man whose soul has for too long gone unnurtured, and we feel for him the importance of finding a group in which he belongs and is appreciated. That said, the film is indeed comedic — not in the manner of some British films in which the slightest relief from hopelessness counts as comedy, but in a sometimes understated yet always uplifting recognition of the wonders of freely disregarding public disapproval for the sake of being true to one’s sillier self.

Some of the promotional fluff for this film refers to it as The Full Monty in speedos — enough to render it unappealing to many. Take no notice of it, unless a brief sight of a few bottoms will upset your digestion. And, as with so many British feature-film festival entries, Swimming With Men suits and deserves a wide audience. See it while you can, and enjoy Brydon’s playfulness as Eric recovers his joy.