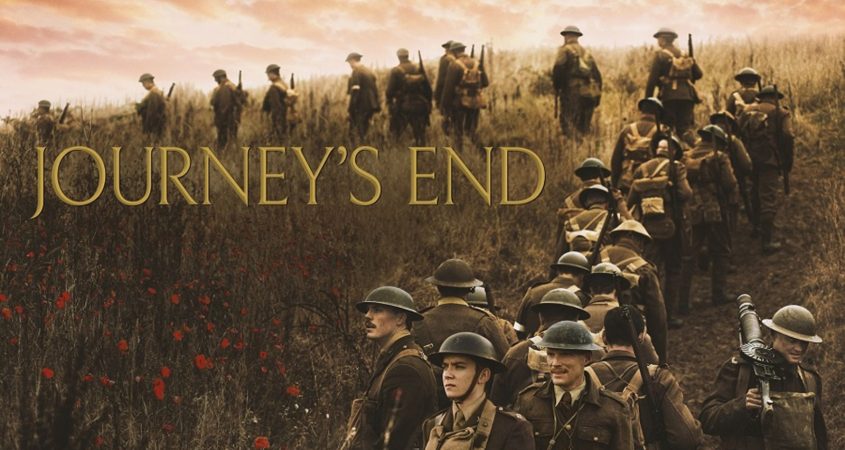 This year marks the 100th anniversary of the end of World War 1, the war that was said to be “the war to end all wars”. How sadly wrong that adage was to prove.

Journey’s End, a British film adaptation of the 1928 play of the same name by R. C. Sherriff, is set in the World War I trenches near Saint-Quentin, Aisne, in Northern France. It tells the story of a group of British soldiers in the four days leading up to 21 March 1918, the start of the Spring offensive, or Kaiserschlacht, a series of German attacks along the Western Front that ultimately led to the end of the war.

In the trenches we meet a number of senior and junior officers, led by Captain Stanhope (Sam Claflin), a good man who has become dependent on alcohol to manage the ravages to his spirit of three years in the trenches; Lieutenant Osbourne (Paul Bettany), who faces their reality with quiet gallantry; Second Lieutenant Trotter (Stephen Graham), who copes by eating; Second Lieutenant Raleigh (Asa Butterfield), whose naivety and idealism typifies what so many of the very young men who rushed to enlist believed; and Second Lieutenant Hibbert (Tom Sturridge), who epitomises the paralysing effect of utter fear.

Two of the most notable performances are given by Andy Gathergood, who compellingly plays the Sergeant-Major, and the incomparable Toby Jones, as Private Mason, the wise and cheerful cook who understands and adroitly manages all the intricacies and foibles of his superiors.

In Journey’s End we are given an intricate insight into many aspects of the human spirit, into the toll that relentless fear and horror can wreak on even the finest individuals, into the futile and often callous throwing away of lives, into unwavering honour, and into stoicism and heroism on both grand and minute scales.

The portrayals in this film are extraordinarily believable, an amazing feat from men born in our modern times, and undoubtedly a testament to the director, Saul Dibb. The cinematography is rich and creates great mood, although some of the hand-held camera work is a little distracting. The soundtrack is beautiful yet unobtrusive, drawing the viewer emotionally closer to the story.

Journey’s End is an intimate film, shot beautifully and truthfully. It does not shrink from the truth of trench warfare and the madness of slaughter on an insane scale, but it does more than elucidate these: it shows us something about courage, selfless personal sacrifice, and true honour. It is a fitting reminder in 2018 of what so many gave in 1918.