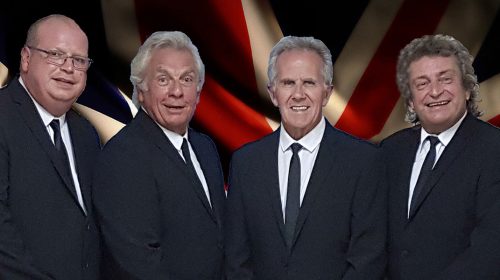 In 1964, an English beat rock band formed in Manchester calling itself Herman and the Hermits, soon to be shortened to Herman’s Hermits. Late in that same year the band released its first hit, I’m Into Something Good, which topped the UK singles chart and reached number 13 in the US. The band went on to have success after success, with Mrs Brown You’ve Got a Lovely Daughter, I’m Henry the Eighth, I Am, and There’s a Kind of Hush, to name just three.

Scroll forward 55 years to find the band still touring and performing. The line-up has changed from time to time, with drummer Barry Whitwam being the only remaining original member. With him are lead singer and bassist Geoff Foot, guitarist Paul Cornwell, and keyboardist Tony Hancox.

The stage at The Playhouse was warmly lit and backed by a Union Jack with “Herman’s Hermits” emblazoned upon it, as has typified the band since its inception, along with the band members’ matching suits and ties.

What was immediately obvious was that the band was as musically excellent as ever, as one song ran smoothly into the next. Along with 30-odd much-loved songs, including End of the World, Baby, Baby, Can’t You Feel My Heartbeat, and My Sentimental Friend, there were two medleys, drawing together such favourites as Poetry In Motion, Carol, Dream Lover, Diana, and No Milk Today, and a newly written song, That’s Life. And Barry Whitwam’s extended drum solo on Sandy Nelson’s Let There Be Drums showed that age is no barrier to impressively fast and energetic drumming.

A very relaxed atmosphere permeated the evening, with the band chatting to the audience and springing the odd gag naturally. The audience responded with a sea of heads singing and bobbing along, lots of clapping along, and some balcony dancing throughout, and the evening ended with almost everyone up dancing and singing along and treating the band to a standing ovation before having the opportunity to meet the band in the foyer.