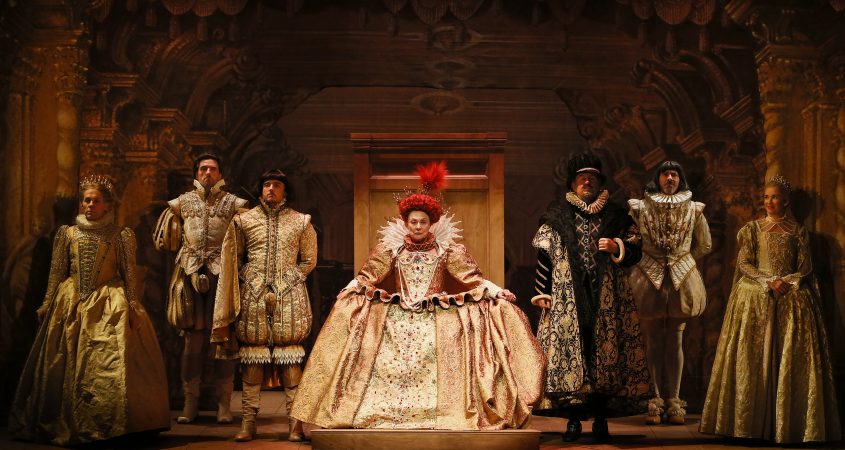 Young Will Shakespeare is in trouble from all sides. Commissioned to write a comedy for Queen Elizabeth I, preferably featuring a dog, Will finds himself with writer’s block. He’s halfway through his line, ‘How shall I compare thee…’, and simply nothing will come — nothing at all. And so begins an exhilarating romp as Will lurches into his disastrous proposed comedy, Romeo and Ethel the Pirate’s Daughter, which never seems to progress beyond its title.

To add to Will’s woes, he has a cold-lipped Anne Hathaway waiting at home, money troubles aplenty, and a demanding Bailiff threatening to shut down Will’s theatre. The only way to make any money and stave off the creditors is for Will’s play to be successfully staged — in three weeks’ time. In spite of the play languishing unfinished with Will in the grip of inspiration stagnation, rehearsals must begin — and they do. Every variety of would-be actor of vanishingly little to no talent takes to the audition stage to give body to every playwright and director’s nightmare. But, what with beggars’ not being able to be choosers, egos’ needing massage, and favours’ being called in, the undesirable cast is cast. Worst of all, there’s simply no decent Romeo. Will groans while the director assures him that it will be all right on the night.

Enter the beautiful Lady Viola De Lesseps, a long-time fan of Will’s work who also cherishes a dream of being an actress, a forbidden profession for a woman. Will is smitten. Lady Viola is smitten. But, naturally, there are complications, which mount as deceptions lead to further deceptions and twists and turns escalate until life itself hangs in the balance.

Melbourne Theatre Company’s production of Shakespeare In Love is tremendous in every way. The costumes are magnificent, and the sets imaginative and marvellous; the choreography is fabulous, the comic timing everything you could wish for, the lighting beautifully atmospheric, and the acting truly outstanding; and, if that’s not enough, there is even utterly delightful live music as minstrels wander in and out.

The cast is brilliant, and your heart will melt at the appearance of the sixteenth and shortest cast member. No one misses a beat as the adventure surges over them all with entrances, exits, movements, and set transformations around the actors sometimes assuming balletic qualities.

As to whether the goodies prevail over the baddies, wagers are won or lost, the Queen is satisfied, passions are sated, and true love conquers all, well, you’ll simply have to go and see for yourself. And going and seeing for yourself is the best thing you can do if you’d like a night out to remember with relish.