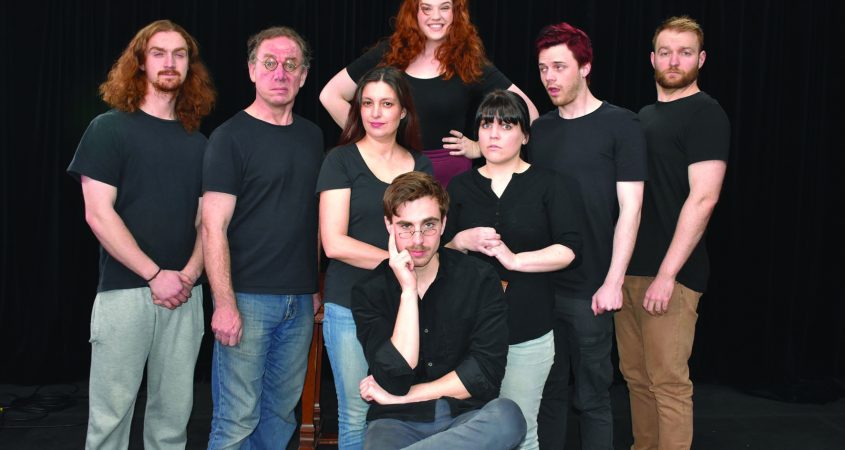 The Good Doctor by Neil Simon and Anton Chekhov will be the second collaboration between Limbo Theatre and Honest Puck Theatre, which plays over three nights at Perform Australia Theatre 28-31 August. As a result, we thought, a jolly good time to touch base with Limbo Theatre to see what they’re all about, and what we can expect.

Live Theatre Performance of the silly and serious, often a combination of the two.

We formed in December 2017. We are an ensemble who graduated from the Canberra Academy of Dramatic Art, now known as Perform Australia.

We wanted to form our own company for a number of reasons. This is our passion. We all studied acting and performance and wanted a vehicle in which to exercise our skills on a regular basis after drama school.

We also wanted to take control of our careers and not be subjected to the audition panel. It’s been a very empowering process to stage our own shows.

Through our previous production of ADOAA we explored the hypocrisy of authoritative institutions and how historically, they have abused their power. The piece was one of political satire and unfortunately, even though written in the ‘60s, felt all too modern.

This time around with The Good Doctor, the content focusses on the absurd nature of humans which affords us the opportunity to laugh at our own foibles and faults. We as an audience recognise the situations the characters are in and can sympathise, whilst laughing.

Because the play is presented as short stories each scene has a different relationship dynamic. It offers the audience variety and we feel Neil Simon has captured Anton Chekhov’s humour which has gone unappreciated in western history.

Who/what influences you as an artist?

We have many influences as a group. We pride ourselves on being ‘seriously silly’ which allows us the dynamic of exploring multiple different practitioners and theatrical movements.

Our ensemble have a broad range of personal interests so we try and incorporate those interests into our shows. We have used slapstick comedy, clowning, poor theatre, comedy of errors, and naturalism all blended together to reach our performance outcome this time around.

Putting on our first show in 2018 which we co-produced with Honest Puck Theatre company; Accidental Death of An Anarchist. It was a huge learning curve for us all, wearing multiple hats, not just a performance one.

We are looking to develop and devise our own work with the idea of touring, perhaps doing the fringe festival circuit.

The challenges we’ve faced as a group are ones that aren’t uncommon to a lot of performers or production companies which is about the challenge getting audiences to shows and affordable venue hire.

We’ve been very fortunate to have the support of Perform Australia to help us along the way but there are plenty of groups who don’t have the same support network. Having affordable venues which showcase local independent groups would be an amazing advantage to the arts community and would help grow the independent theatre scene in Canberra.

We are advocates for paying our cast and crew and are doing our part to change the ‘it’ll be great exposure’ culture that exists not just in this region but everywhere.

What are your upcoming performances?

Our season of The Good Doctor by Neil Simon and Anton Chekhov will be the second collaboration between Limbo Theatre and Honest Puck Theatre.