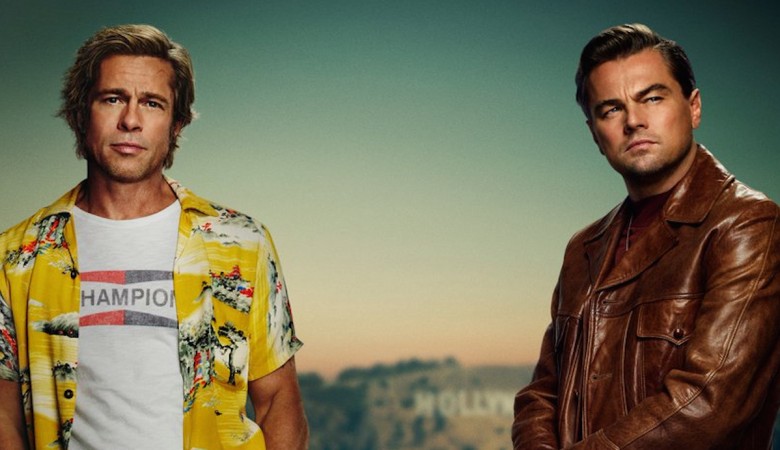 The trailer for Once Upon a Time in … Hollywood spruiks it as the ninth film of writer and director Quentin Tarantino. For many years Tarantino has told the media he plans to make ten films and retire from directing.

And here, the filmmaker may be a man of his word.

Set in 1969, actor Rick Dalton (Leonardo DiCaprio) laments the end of his career in the company of his stuntman and driver Cliff Booth (Brad Pitt).  Dalton was once the star of a popular TV series who transitioned to Hollywood leading man, but the roles dried up and he’s back on TV playing the guest star.

While Dalton is on the way out his neighbours Roman Polanski (Rafał Zawierucha) and Sharon Tate (Margot Robbie) are the toast of Hollywood. Dalton gets a glimpse of the glamourous couple and says, “I’m one backyard barbeque away from starring on a Polanski movie.”

Luck and an old friend are all Dalton has left in a city that’s changing around him. Hippies poke out their thumbs from nearly every intersection. Child performers talk about their acting method and televisions are everywhere. The old western set where Dalton found fame is occupied by members of the Manson Family cult, who represent the counterculture about to upend the city of angels. You can’t help but feel Tarantino is lamenting an age of filmmaking that no longer exists. It’s the end of an era; Dalton and Booth are aimless and questioning their purpose.

Once Upon a Time in … Hollywood is a melancholic throwback that doubles as a resignation from Tarantino who can no longer compete with a culture obsessed with serialised storytelling that’s dominating TV screens. An emotional ambush occurs because Once… isn’t overly reliant on Tarantino’s violent tendencies; aside from one gnarly sequence toward the end. Dalton and Booth’s relationship – acted to perfection by Pitt and DiCaprio – endures despite the fact the world is crumbling around the best buds. Tarantino shows a side we’ve rarely seen as a filmmaker: the optimist.

With retirement approaching, the man behind Reservoir Dogs, Pulp Fiction and Django Unchained is asking if there is more to life than Hollywood?

In Once Upon a Time in … Hollywood, a title that conjures a fairy tale (narrated by Kurt Russell, too), Tarantino brings to life a world where fading actors and rising stars can have an existential crisis set to a killer soundtrack. It’s one hell of a goodbye.