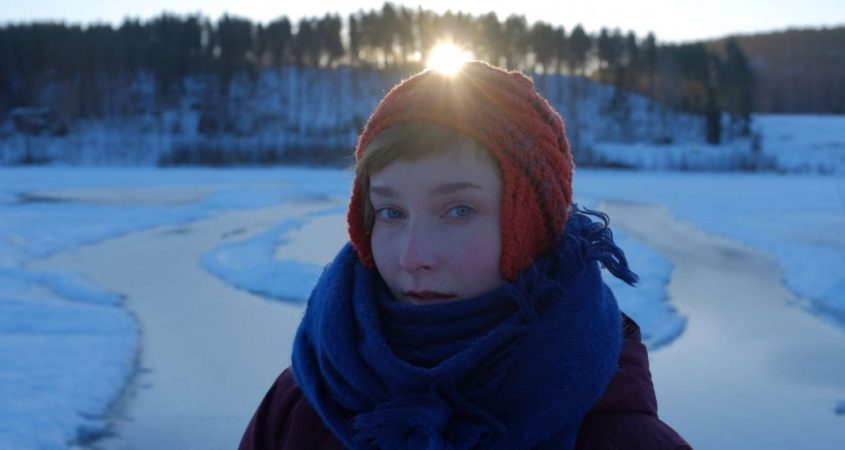 Veera (Veera Lapinkoski), a young Finnish woman, lives with and cares for her intellectually disabled older brother, Ville (Ville Oksanen), until he enters a residential care facility. Veera regularly engages in live-action role-play (or LARP) events, taking a persona named “V”. Along with psychological therapy, LARPing is apparently what she does in order to deal with the effects of a childhood dominated by her alcoholic and violent father, from whom she’s been estranged for many years. (The film was shot over five years — explaining why she says at one point that she hasn’t seen him for ten years, then later that it’s been 15 years.)

The film is cinematographically beautiful, with some stunning landscapes, interesting costumes, and many detailed close-ups of a pensive or sad or tearful Veera. And many of the LARPing sequences are also interesting and provide variety and a contrast with our view into her real life.

The Magic Life of V reveals that something still affects Veera from a childhood that was, at least sometimes, unhappy; and it shows how she is dealing with this as an adult, as well as her relationship with her intellectually disabled sibling. But, regrettably, the film fails to meet its story potential. We learn nothing of Veera’s life beyond her interactions with her brother and a very few others — none of these interactions advancing the story. As well, the film contains disjoints — likely due to the patchy filming schedule — that leave the audience to guess how several major turning points occurred. Cinematically enchanting though it is, The Magic Life of V unfortunately leaves the viewer in virtually the same place at its end as at the start — waiting for a story.