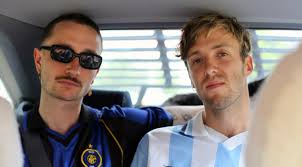 It’s not uncommon for an album, especially a debut album, to follow a long and convoluted path to release.

Skydeck’s first effort, Eureka Moment, started life as an instrumental album made on a borrowed synth over three years ago and ended up as… Well, something not that.

The effort of two former housemates and regulars of the Osbourne Again/Ocean Party/Ciggie Witch etc part of the Melbourne music scene, Mitch Clemens and Dom Kearton, Eureka Moment sort of juts out from different recent local records; sort of how its namesake does on the Melbourne skyline.

Like most of the bands circling that part of the Melbourne scene, the dynamic lyricism comes to the fore, and the stories told are vivid.

But underneath, a blend of lo-fi pop, punk, post-punk and what could be called “other” battles throughout. It takes a couple of listens to get all the way around the idiosyncratic product, but it works.

The record somehow balances shifting through style but also stays pretty consistent in quality. I’m not sure there’s a better song about sad old blokes betting at the front bar of a country tavern than the album opener Live Bait. The description of the fact that a “digital horse don’t show remorse” is familiar to anyone who has watched the near life-like recreations of fake racing that allows endless around the clock gambling action.

It’s far from the only highlight on the record either. Solid State probably provides the most memorable pop moment here, with as close to a big chorus as Skydeck gets, while the anti-Lush/Elon Musk soliloquy on Cryptic Bassline Project also sticks in the mind. But to be honest, it’s all pretty solid.

Due to its style, it’s probably not going to grab everyone at first listen – if at all. But Eureka Moment has enough substance to have staying power, and reveals more and more with each spin.