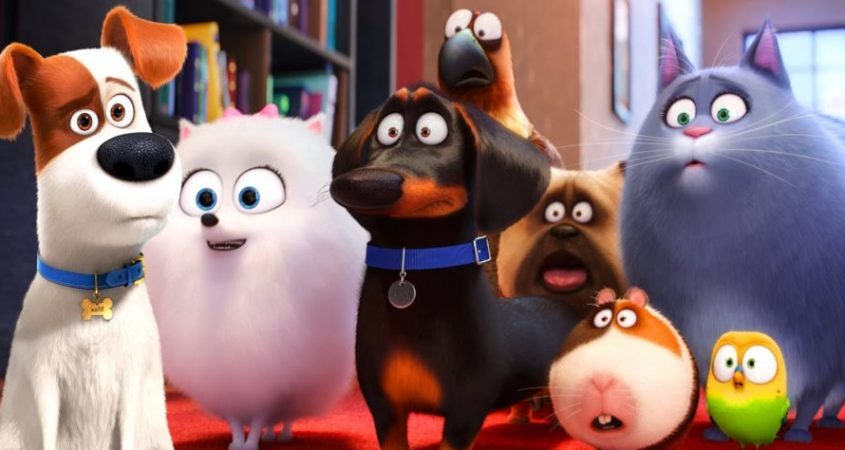 This sequel to The Secret Life of Pets brings three intertwining stories to life.

The comfortable routines of Jack Russell terrier Max (voiced by Patton Oswalt) and shaggy Newfoundland mix Duke (voiced by Eric Stonestreet) are changed forever when owner Katie marries and has a baby, Liam. Whilst Duke remains as cheerful and relaxed as ever, Max is apprehensive, having heard that life is never the same once a child enters the family.

But, with time, Max comes to love Liam and begins to constantly worry over his safety, a nervous state that ends up necessitating treatment. An opportunity arises for Max to find some inner resources with which to face this new world when the family goes to stay on a farm and he meets the tough Welsh sheepdog Rooster (voiced by Harrison Ford). Rooster challenges Max to be all the dog that he can be.

Meanwhile, Max has left his beloved toy, Busy Bee, for safe-keeping with his Pomeranian friend, Gidget (voiced by Jenny Slate). Unfortunately, Busy Bee gets lost and winds up in an apartment teeming with cats, and Gidget must find a way to rescue her, for which she must enlist the help of Chloe, an entirely uninterested and initially reluctant grey tabby (voiced by Lake Bell). With Busy Bee’s fate hanging in the balance, it’s up to Gidget to pull off Chloe’s daring masterplan for her rescue.

The third story, and the one that eventually sees all protagonists come together on a joint mission, is that of Hu, a white tiger cub who has fallen under the power of the cruel circus owner Sergei (voiced by Nick Kroll).

Daisy, a Shih Tzu (voiced by Tiffany Haddish), has found Hu frightened in a cage. She seeks the help of Snowball, a white rabbit who proclaims himself the superhero “Captain Snowball” (voiced by Kevin Hart) to rescue Hu. The initial rescue attempt meets with success, but ultimately the three are tracked down, leading to the re-imprisonment of Hu and the imprisonment of Daisy and Snowball. Can everyone band together to find and rescue Hu, Daisy, and Snowball from the evil Sergei and his minions?

With a storyline involved enough to maintain adult interest but not too complex for young minds to process, and with protagonists everyone can relate to, The Secret Life of Pets 2 represents the best of entertainment suitable for all ages. The script is written with panache by screenwriters with both maturity and insight into young minds; the lines are well articulated by the voice actors; and the characters are beautifully developed representatives of their species and breeds. The film not only captures the quirks we recognise in different breeds and species of animals, but does so in a way that allows viewers to see into their minds and hearts, albeit as reflections of human minds and hearts.

Although this film is principally an adventure story for children, it touches on themes that many children can relate to in life: the arrival of a new sibling whose existence changes the world as the child knows it, and who takes up much parental attention; the fears many children experience of the world beyond the home; and the overcoming of indifference and cruelty through courage, compassion, and co-operation.

Children and adults alike will love this film.