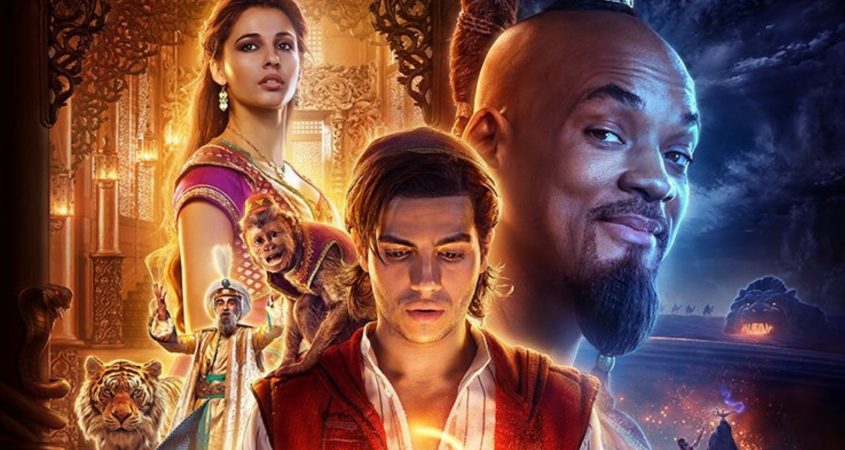 The street orphan Aladdin (Mena Massoud), a joyful lad who survives through constant theft, rescues a Palace servant, Dahlia, who is in reality the Princess Jasmine (Naomi Scott), when she finds herself in trouble in the local bazaar.

He immediately falls in love and arranges to meet her again, but is captured in the meantime by the Agrabahn Sultan’s Vizier, Jafar (Marwan Kenzari). Jafar has learnt that a certain lamp in a heavily fortified cave of treasures contains a power that will enable him to fulfil his dream: Genie (Will Smith). And Aladdin may be the only person able to retrieve the lamp for him.

But Jafar intends to repay Aladdin’s help with immediate treachery, and his dream is to usurp his benign master, the Sultan of Agrabah, and invade the peaceful neighbouring kingdom, consolidating power by ruining the lives of everyone around him.

Aladdin would need to become a prince in order to be able to marry Princess Jasmine, which Genie imaginatively brings about.  But Aladdin is a generous soul and promises to use his third to fulfil the genie’s deepest desire — his freedom. Aladdin and his constant companion and partner in crime, the monkey Abu, have already freed a delightfully personable magic carpet (which becomes an essential character in its own right).

Massoud’s Aladdin and Scott’s Jasmine are utterly believable and come across with real chemistry, and Kenari’s Jafar is the classic charming schemer: likeable and utterly without scruples. Will Smith’s Genie has a considered, deeply thoughtful approach to his self-imposed task of helping Aladdin along, and Genie’s thoughtful approach to living gives the movie much of its emotional depth.

Aladdin contains a few well-known songs from the original animated version, sumptuously orchestrated and marvellously sung. It isn’t a musical in the sense that songs stand in place of dialogue; but the songs add a good deal to its full-heartedness, and the incidental music too accentuates the most moving scenes. And in parts the story is very moving; surprisingly so for what is essentially a CGI-enhanced comedy.

With its scale of action, beautiful effects, fine detail, and luscious soundtrack, Aladdin is one film you must catch on a big screen and in high-fidelity sound. Those who enjoyed the fully animated feature version will find this new, live-action version just as much fun.