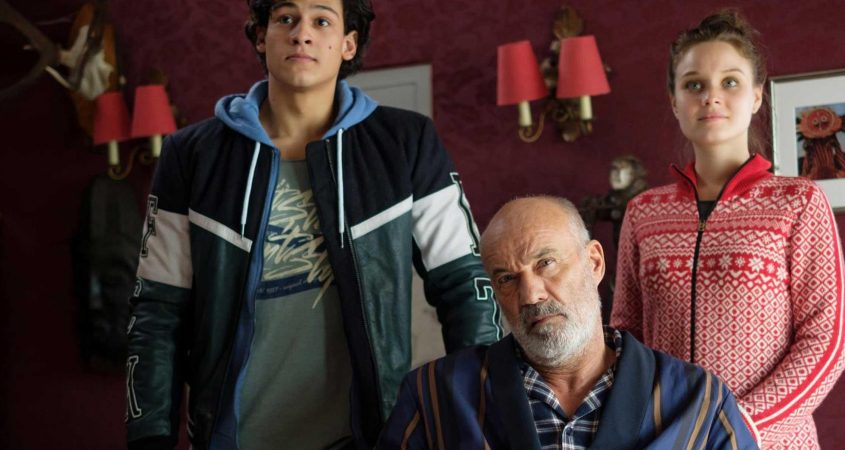 Denis (Emilio Sakraya) is a small-time burglar who has managed to accrue debts to some rather unpleasant loan sharks; debts he can’t repay. His larrikin disrespectfulness at the fore, Denis tries unsuccessfully to evade his criminal debtors, but they capture and deliver him to an isolated Austrian residence with orders to rob the place; then they drive away, leaving him to it.

Thinking the house deserted, Denis breaks in. While checking the home and searching for the safe, Denis is shocked to come across the home’s owner, rich businessman and stroke patient Raimund (Heiner Lauterbach), who is wheelchair-bound and has lost his capacity for speech. Then Raimund’s grand-daughter Charlotte (Sonja Gerhardt) arrives and mistakes Denis for her grandfather’s new nurse.

With the real nurse due to arrive the following day and a severe snow-storm trapping the three in the house together, Denis must, though it irks him, play nurse to the misanthropic Raimund — who knows very well what he’s about.

As events unravel, Charlotte’s suspicions mount, and Denis’s position becomes increasingly untenable. And, of course, when the snowstorm ends, the loan sharks will be back, expecting Denis to deliver the haul into their hands.

Dubious motives, bad behaviour, and deceit are transformed into wonderful comedy in Cold Feet. If you’ve ever considered a career in creative burglary or even impostering, this film is the most entertaining of instruction manuals you’re likely to find. Even if you haven’t, don’t miss it!