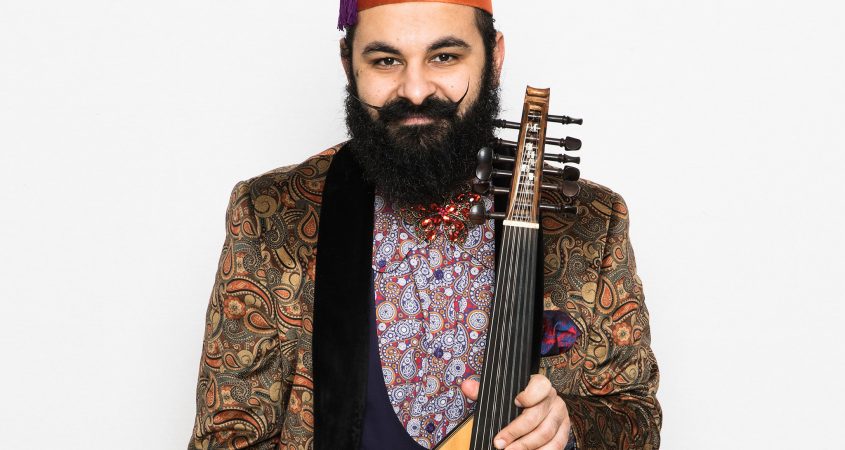 Joseph Tawadros AM is a four-time ARIA award winner, a master of the Oud, a Middle Eastern lute, a composer, storyteller, and a dapper gent to boot.

This 30 June At The Street Theatre, Joseph will be joined by his brother James Tawadros on the Req, Bendir (Egyptian percussion), Karl Dunnicliff on the double bass, and Matt McMahon on the piano.

Ahead of this thrilling mix of Middle Eastern, jazz, traditional sounds and contemporary innovations, us BMA-ers had the chance to catch up with the man to see what makes him tick.

“The oud is a strong symbol of Middle Eastern and Egyptian music,” Joseph says, when asked about his musical weapon of choice. “Being born in Egypt but brought up in Australia, I found the oud a good link to my heritage and, my family being Arabic music buffs, I couldn’t escape it.”

Joseph is a true international man; born in Cairo, raised in Sydney, and currently living in London. He performs all over the world and often plays with orchestras presenting his original works, including BBC Symphony Orchestra, Australian Chamber Orchestra, Melbourne and Sydney Symphony Orchestras and the Academy of Ancient Music in London. Was his international fusion of sound an intention from the beginning, or a natural occurrence?

“It was always something I did naturally,” he confirms. “I love music and listening to all types, and I think the more you listen, the more your body soaks in the music, digests it in its own way and reinvents it in another way. I think all the musical styles I listen to stew inside me and create a music which is hard to categorise. My first and foremost love, though, is traditional music of Egypt; the other genres add different flavours to my compositions.”

Speaking of different flavours, Joseph is know for incorporating improvisation into his performance.

“I feel it’s where a player can really shine and change the same piece of music every night,” Joseph enthuses. “It’s that freedom that allows magic to happen with the other musicians on stage and the audience. Improvisations are, of course, dictated by scale, rhythm, and chords, but no player can ever plan what they will play. Good improvisers are good listeners and are sensitive to what’s going on around them. You can pick up on something a fellow musician is playing or the energy of the audience; that’s why it’s so special to me and a must when music making is involved.”

Joseph has recorded 14 albums of original music and he is the Oud player you hear on the ARIA award winning Ali’s Wedding soundtrack. This is but a slice of what led to Joseph being able to affix an AM to his name.

“[Receiving a Member of the Order of Australia is] the greatest honour to be bestowed upon me as far as awards go. To be recognised and be given the title of AM for my services to music is something very humbling and something I never could have expected.”

The award, accolades, and audience devotion is certainly attributable to Joseph’s incredible talent, but it is ably matched by the desire and enthusiasm for his craft.

“[It’s about] connecting with strangers, providing a voice for others, an outlet and a type of healing for people I haven’t met,” he says. “My music is very personal and has an emotional depth, commenting on moments in my life. The audience identifies, and I think that’s why I feel very close to them when performing.”

After whipping through a few ‘getting to know you’ questions, such as which songs he would love to do an Oud version (“Working Class Man, You’re the Voice, I Was Made For Loving You“), what he does with his spare time (“I love going to museums and filling my mind with art and images”), the meaning of life (“create for the other and expect nothing; take the music seriously and not yourself”) and what makes him laugh (“I haven’t laughed for the last 10 years”), before getting onto the big question: any tips for maintaining such spruce facial hair?

“One must be dedicated to the cause,” he says, with great reverence; like listening to an ancient sage impart wisdom. “Wash and condition everyday, fragrance regularly, and believe in its density.”

The Joseph Tawadros Quartet play at The Street Theatre on Sunday, 30 June at 4pm. Tickets range from $25-39 and are available from http://www.thestreet.org.au/shows/joseph-tawadros-quartet-0