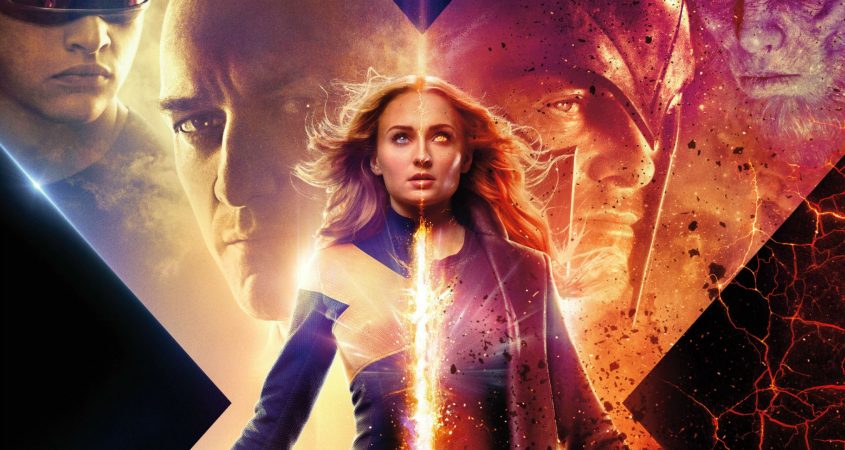 In the closing of this trilogy the X-Men must band together to save one of their own – Jean Grey (Sophie Turner – Game of Thrones) as she loses control over a malicious, alien power that she absorbs after a rescue mission gone wrong.

Inner tension breaks out among the heroes, including Professor Charles Xavier (James McAvoy – Filth), Magneto (Michael Fassbender – Shame), Mystique (Jennifer Lawrence – The Hunger Games; American Hustle) and Cyclops (Tye Sheridan – Ready Player One) as they are not the only ones trying to aid Jean Grey – for better or worse.

Dark Phoenix offers a nice sprinkling of fan service and Easter Eggs so keep your eyes peeled and ears open. These prequels with new timeline movies have been strong so far, with only X-Men: Apocalypse being slightly underwhelming, but Dark Phoenix just kind of stumbles alongside, dragging its heels to the finish line.

This is the directorial debut of Simon Kinberg who has worked on The Martian, X-Men: First Class and Logan – so what went wrong? Kinberg juggled writing, producing, and directing and it’s fallen in a heap with a messy narrative that feels lacklustre and unfinished. Such as when we are introduced to our characters the time-stamp says 1992 yet beyond that there’s no other indication of that era: no acid wash jeans, thick TV units, chunky sneakers or tacky slang. Just tacky dialogue, unfortunately.

I love X-Men as a whole – the ’90s TV show, the graphic novels, (most of) the movies, but instead of ending with a bang it has ended with a fizzled flap of the phoenix’s wings (pun entirely intended).

Dark Phoenix is entertaining at face value, at least.

Support Andrew Myers on Patreon!
13% complete
When we reach $500 per month we will begin the official BMA Podcast. This will include interviews with some well-known musicians and artists, tips and tricks for publishing in print and online, as well as other discussion topics around Bands, Music and Arts in Canberra!