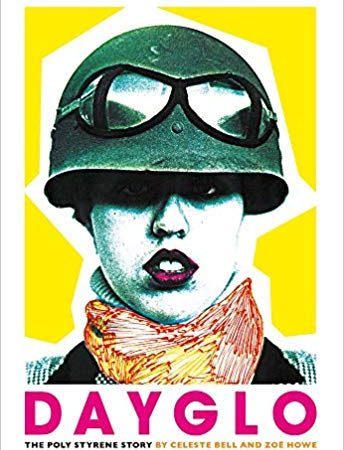 From punk-rock rocket to Hare Krishna diva, the Poly Styrene story was a wild ride with a lithium-fuelled interlude.

Oh Bon-DAAAGE, up yours! ONE TWO THREE FOUR, screamed Poly Styrene and jump-started a generation of riot grrrls.

Lead singer, writer, and creator of the X-Ray Spex, Poly was one of punk’s UK icons, best known for her blistering belters and neon aesthetic. When it was released in 1977 the album Germfree Adolescents was met with everything from slavish adoration to open derision. Under a bright exterior was a fascination with the weirdness of consumerism and a fuck-you attitude that looked like feminism from the right angle.

But it all melted away with that flash-in-pan brilliance of so many bands of that era. Mere months after Sid Vicious was arrested, Poly was being hospitalised for hallucinations, at the start of a life-long mental health journey. Dayglo unpacks post-Spex Poly beside the post-Spex scene, cutting between musicians discussing her influence and family reliving her years medicated and misdiagnosed.

Dayglo reads like a documentary transcript, flipping between talking heads that get a line or two each before the camera moves on. It’s surprisingly coherent, fluid even, cramming a lot of diverse views into a sharply edited narrative. In the rhythm of it it’s a little too easy to lose track of who’s what, so you’re not always sure if it’s a sister or a mental health specialist weighing in, but otherwise a fun format. Dayglo’s a punk-girl mecca too, so there are loads of names that’ll jump out at you, like Kathleen Hanna (Bikini Kill), Viv Albertine (The Slits), and Ana da Silva (The Raincoats).

It’s also a gorgeous book. Like physically gorgeous, like I kinda wanna get a room with it. It uses colour sparingly but somehow projects hypercolor. It’s big and hardcover and luxe feeling, and it’s either ironic or extremely appropriate given Poly’s lyrics about the way material things get a hold of us. I’m just saying, if this book was a person no-one on tinder would be ghosting that shit.

Poly was eventually correctly diagnosed with rapid-cycle bipolar and took refuge in a Hare Krishna community where her hallucinations were accepted as visions. But it was years of managing a life of unmanaged bipolar and trying to create while dosed up on lithium before Poly really got it together, tragically releasing her last solo album shortly before succumbing to cancer. Project Indigo was a return to form, from a 53-year-old, spiritually woke punk still telling y’all she’ll do what she wants.

You can call me a brat or the girl is too fat, but I would say I’ve got my little yoga mat,

I don’t care what they say, I’m kitsch all the way.