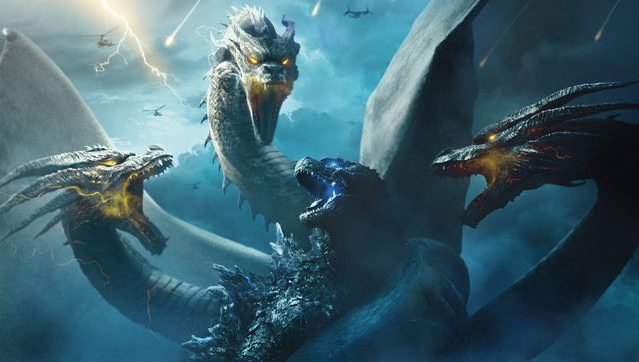 A winged three-headed monster named Ghidorah is the villain of Godzilla: King of the Monsters (besides the humans; I’ll get to that in a second). In the sequel to Godzilla (2014), which is also part of the ‘Monster-Verse’ that includes Kong: Skull Island, the balance of nature is in disarray thanks to man-made pollution and overpopulation.

There’s more to Godzilla: King of the Monsters than giant creatures punching each other.

According to a group of eco-terrorists and an idealistic scientist (Vera Farmiga), mankind is a disease and giant monsters known as ‘titans’ are the cure. Destruction follows the titans wherever they go; people get eradicated and nature re-claims the scorched earth. The titans get a wake-up call after a centuries-long slumber, but instead of a little old school ‘survival of the fittest’, the apocalypse begins! Ghidorah roars the loudest, proclaims himself king and nests in Washington D.C.

A dying planet and a tyrant in the American capital; where does our world end and this film begin?

Do not underestimate Godzilla: King of the Monsters. Yes, there’s a scene where a pilot ejects from a fighter jet into the mouth of a flying monster, but it’s still a blockbuster with a political pulse.

Godzilla began as a symbol of the nuclear horrors inflicted on Japan by the Hiroshima and Nagasaki bombings. The fear in the eyes of civilians fleeing Godzilla represent the psyche of a nation still dealing with a catastrophe. Over time, Godzilla went from foe to friend as he protected the world from various monsters, as well as a forgettable American remake in 1998. The nuclear edge has shifted away from horror since Godzilla made his debut in 1954, but Godzilla: King of the Monsters stomps along to environmental science-fiction themes.

The terror of tampering with the atom has been replaced by global warming. The titans represent nature’s push back against mankind’s misuse of the planet. Director Michael Dougherty presents imagery of the monsters in action that’s a mix of biblical chaos and a heavy metal album cover. The rise of the titans is a metaphor for the worldwide course correction required to halt a planet in crisis.

While Godzilla and Ghidorah traded blows, I thought about recycling.

Like all great science-fiction, Godzilla: King of the Monsters asks tough questions about what it may take for humanity to survive and the sacrifices needed. I thought more about the state of our world in the company of Godzilla; even when the film’s genocidal ideas bordered on silly and militaristic excess became mind numbing. While Godzilla and Ghidorah traded blows, I thought about recycling. While Mothra duelled with Rodan, I thought about riding my bike more.

Blockbusters where monsters fight each other are an emergency exit from reality – Godzilla: King of the Monsters has plenty of awesome moments – but the issues affecting the world in 2019 roar into the cinema. A reveal about the origins of Ghidorah put the creature’s claim to the throne in doubt and Godzilla becomes the rightful heir. There’s a sense of the human characters working to support their environmental champion for once; it’s like properly sorting your paper and plastic surrounded by explosions. Godzilla is the titan who strives to maintain balance so the planet can survive. Ghidorah wants to destroy all life on Earth and remake the world in his image. There’s a distinct line drawn between the need to act and the acceptance of defeat.

I left the theatre glad Godzilla was on our side but felt much worse when reality hit.