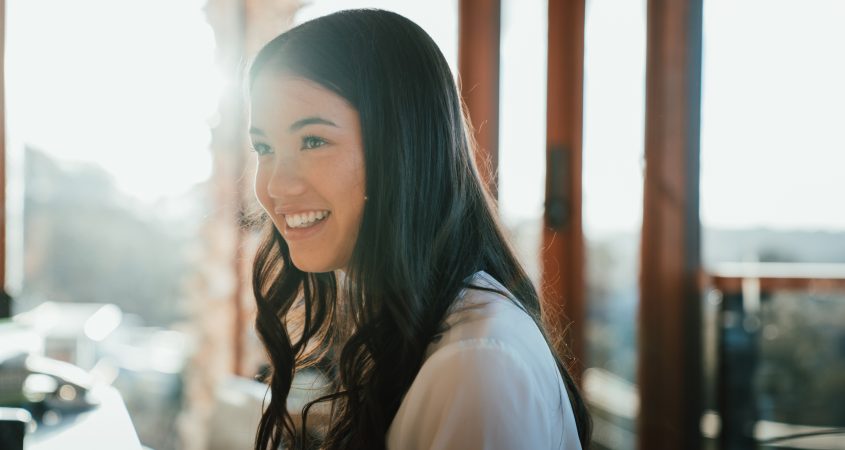 Usually just me! But sometimes Damien Slingsby, Andy Mitchell, Adi Jones and Ash Violi join me too, which is good fun.

I would say it’s very lyric heavy, emotive, and organic. I love using string instruments and tend to write most of my music on the piano. I write about things I see around me; mostly about my feelings.

My friends like to describe it as ‘sad piano: with a beat’.

My biggest musical influences are probably Tom Odell, Sigrid, Norah Jones, Elton John, Missy Higgins, Rodriguez, and Carol King just to name a few off the top of my head!

In life, my biggest influences are my family. I’m also going to add on Taylor Swift but we probably shouldn’t get into that right now or this will be way too long.

There’s been so many wonderful experiences I still can’t believe I’ve been lucky enough to have, but I think the best ones have been playing my songs at Llewellyn Hall with CYO and the whole journey behind that, supporting John Farnham and Daryl Braithwaite at Anthems last year, writing and bringing to life a bunch of really special songs this year during February and March with some talented friends, and the time this little girl came up to me and gave me this hand drawn picture and said she started singing lessons because she saw me on TV. Blew my mind.

One of them would honestly have to be graduating school! I got some results I’m really happy about and I think seeing how far my friends and I had come since the beginning of high school was really emotional. But a great feeling. We went through everything from family stuff to boy dramas; we had loss, heartbreak, all-nighters, failures, breakthroughs, fights, health problems, injuries… you name it and we found out that to have all that happening while you are trying to make big decisions about your future was definitely not easy.

But I’m proud of myself for making it through something that, at times, felt like was never going to end, and I’m proud of my friends. Now I get to watch them all navigate the big world, kick their goals, and figure themselves out. It’s really cool.

At the moment I’m currently working on an EP which is really exciting. I’ve had the chance to work with some incredible producers and writers, and write a lot of music that I’m really proud of. The demo/first drafts were shown to my label a couple of days ago so hopefully (fingers crossed) you’ll be hearing a little more soon!

I’m also looking into doing some part time study next year. I’ve been saving to go to Europe as well. I’m looking at opening shows for some artists I love and hoping to go on a tour of my own soon. That’s the dream anyway. For now, I plan on writing and writing and writing.

Vine compilation videos, the lyrics to Baby Blue, my mum’s dancing, everything my little cousin Keoki does, and that one video where people can’t spell (it’s called ‘how is prangent formed’, look it up – you won’t regret it).

Comment sections, mean people, and the people in power who continue to make decisions that are damaging our planet.

Canberra music scene wise I’d make going to gigs regularly a norm for the everyday Canberran (because there’s so many wonderful things on all the time – people keep trying to tell me nothing happens in Canberra and it makes me stressed) and I’d get more venues up and going! Otherwise I think it’s a lovely little (and ever-growing) community full of very talented people.

If I could change anything about the music scene in general it would probably be to increase society’s value placed on musicians, get rid of the folks who like to take advantage of us both financially and artistically, and get more of our talented women behind the desk and producing. But I feel like we all want to work to change those things.

I’m doing a gig at Smith’s Alternative on 27th July with my band, supported by the lovely Madie Chynoweth and Eden Plenty who will be playing a bunch of their original material. I’ll be giving a sneak peek of new songs and playing some old ones too. We’re all super excited about it, so we would love to see you there for a night of music and getting emotional.
Find out more & get tickets at https://www.smithsalternative.com/events/lucy-sugerman-57578

It's a deep dive into Art, Not Apart's 10th Anniversary multi-arts festival this issue, with a merry jaunt with all the curators to see what they have in store. Also featuring: Iva Davies of Icehouse Cowboy Junkies Pod People Dorothy-Jane Chris Ryan Kirsty Webeck National Folk Festival Dismantle - Punk & Metal Festival Melbourne Ska Orchestra Plus a Stuart McMillen comic

Support BMA Magazine on Patreon!
6% complete
When we reach $500 per month we will begin the official BMA Podcast. This will include interviews with some well-known musicians and artists, tips and tricks for publishing in print and online, as well as other discussion topics around Bands, Music and Arts in Canberra!