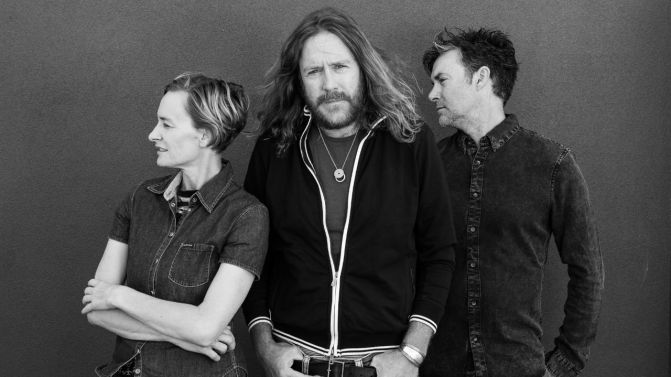 In 1996, Spiderbait became the first Australian band to take out the Hottest 100 with their short, punchy single, Buy Me A Pony. The following year they won their first ARIA for Ivy and The Big Apples. And if you’re a ’90s baby like me, you’ll all remember their second single, Calypso, playing in 10 Things I Hate About You while Kat Stratford angrily reads The Bell Jar.

In 2019, Kram, Janet, and Damian are fresh from headlining the Hotter Than Hell tour and are headed Canberra way to rock our socks off at UC Refectory.

I called Kram to have a chat about punk music, their early gigs, and to get some advice on what makes a thriving band. But first, that tour.

“Hotter than Hell was amazing,” Kram enthuses. “So sorry that it didn’t make it to Canberra. Getting to play alongside Jebediah and Magic Dirt again was really great. Both those bands have some of my favourite female musicians and it was really great to reminisce playing in Melbourne with them all those years ago.”

The interview allowed a chance to wrestle with the topic of non-male musos and punk, the latter inspired by a punk panel interview with Henry Rollins and John Lydon (Johnny Rotten) in which Johnny claimed punk was long dead. Henry interjected with his belief that some of the best punk music of today is coming out of Australia, particularly from non-male acts.

“Punk is so subjective,” Kram states. “Johnny could’ve said “Modern Art is dead”, and in his mind that would be true, but there would be people like Henry there to disagree with him. Punk is such a hard thing to define; it’s so much more than a punk ethos in a band. You could have a classical musician that might be considered punk because of their message and attitudes.

I cite the Dixie Chicks as an example. They suffered some plummeting record sales and death threats but they stuck to their guns.

“Yes! Exactly!” Kram responds, with a laugh. “But I definitely have seen a lot coming from female acts lately. I mean look at Amyl and the Sniffers and what they’re doing. And I have to say to all the guys out there; I’ve been in a band with a woman for 30 years now, and it’s been a really special experience for me. She’s amazing.”

With so many years in the biz, Spiderbait have experienced it on both sides; from the up and coming band, to the seasoned pros that have toured with Henry Rollins, Primus, Beastie Boys, and Fugazi.

“Yeah! That was pretty huge,” Kram admits. “Henry and Black Flag was a big influence on us. Damaged is still one of my favourite albums, particularly Police Story.”

I ask what acts he has his eye/ear on.

“I would definitely have to say Major Leagues from Brisbane. I think they’ve been doing some really fantastic things. I’d also have to say Ruby Fields.”

As a music veteran, does Kram have any words of wisdom to impart upon these, and other, budding bands?

“The number one thing is to make sure the friendship is there,” Kram says. “It’s a really important foundation for that emotional connection. There’s a reason why our band has lasted all these years, you know?

“It’s like a high school group, it has to be a friendship that’s going to stand the test of time and you need to be able to communicate and collaborate.

“A good manager is also something that’s really important,” Kram continues. “If you can find someone that believes in what you’re doing and won’t interfere with you creatively. But also if you’ve got someone in the band that’s really good at all that stuff, that’s great too.

“Just make sure you’re doing what you wanna do; don’t do what other bands are doing just because you think you should. Do your own thing. We’ve all got a perspective and a story. And if the music is good and people like and support you, they’ll come knocking.”

The upcoming show is one of many Canberra jaunts for the trio. Does Kram hold any fond memories of our beloved capital city?

“I actually do!” laughs Kram. “I really like Canberra, I have a lot of fond memories, like playing ANU Bar. And we played a festival that I forget the name of, sorry, but we actually quite enjoy Canberra and we like the crowd. I know we haven’t played there in a while but we keep coming back to it.

I tell him us Canberrans have a bit of an in-joke that the place is like a black hole; no matter how many times you try to leave, it’ll suck you back in.

“It really is like a vortex isn’t it?” he laughs.

And you can be sucked into Spiderbait’s swirl when they play with The Lazy Susans and Teen Jesus and The Jean Teasers – 21st June @ UC Refectory (Tickets available through Oztix).