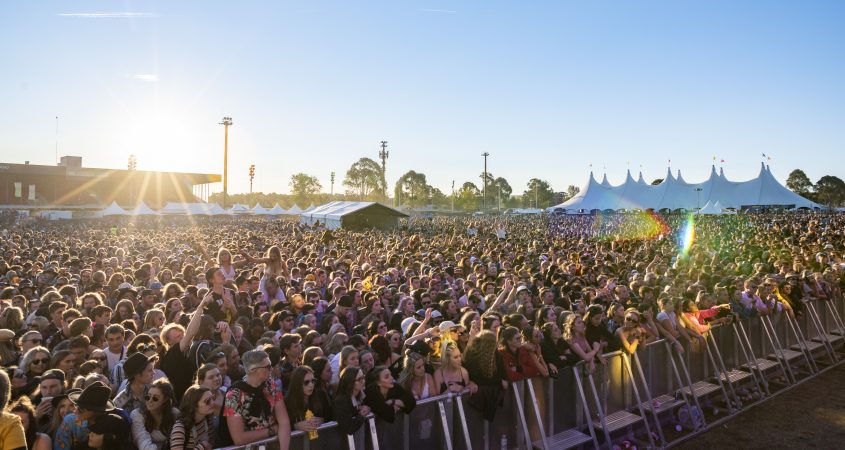 It’s a heck of a spectacle to witness. The EPIC showgrounds are transformed into a heaving epicentre of glitter, tie dye, crop tops, bras, heavy makeup, band t-shirts, plastic beer cups, selfies, and even a huge fairground ride.

As I see the hoards of people moving from stage to bar to stage, I think to myself: “Where do all these people come from?” I figure this is the beauty of a festival like Groovin the Moo – it gives regional kids from towns all around Canberra the chance to see some great quality live music. I even overhear a conversation in the toilet that some women had come from as far as Newcastle. This is the festival I wished existed when I grew up in regional Victoria. This is the entertainment young people need.

Regurgitator win the day, not for most of the punters, but certainly for me. They still sound as good as they did 20 years ago (ouch, I feel old). Quote of the day: “Thanks for listening to our songs, even though you probably don’t know any of them.” Moving from one hit to another, they play all the old favourites as well as their new stuff. They’re loud, fun, and energetic, and their visuals are stunning.

Nick Murphy (formerly known as Chet Faker) fit into the schedule at the perfect time. Some nice, chilled, downtempo music that people could sit and have a drink to in between the more upbeat acts. He is impressive on the keys.

Hilltop Hoods rock the crowd and their female vocalist Nyassa is the cherry on top. Part way through the set, the music stops and the band asks the paramedics to come into the crowd to check on people who look unwell. It is great to see bands taking responsibility to do this, especially as they can see a lot more of what’s going on than someone on the ground level. Other bands – take note.

Coolio is underwhelming, but of course everyone in the crowd sings along to (probably) the only song they know, Gangsta’s Paradise. DJ Spindarella injects a lot more energy into the crowd, but sadly her set is very short.

Billie Eilish is a name I should have heard of, but haven’t, and boy am I impressed. It is impossible to believe she is only 17. She takes to the stage like a duck to water – oozing confidence, pacing the stage effortlessly like a seasoned pop star. She asks the crowd to put down their phones and be in the moment. She is a huge star, but she does not want the negative behaviour that goes with it – and that includes a thousand mobile phones shoved in her face.

A word on pill testing. Groovin the Moo successfully held safe pill testing for the second year in a row. Here are some stats comparing the Sydney and Canberra festivals:

– 234 voluntary participants had their pills checked

– 7 dangerous substances identified, which were all discarded

Groovin the Moo has gone from strength to strength, providing an opportunity to young people to see and listen to great live music they otherwise wouldn’t have a chance to. There is an energy and gratitude at regional festivals that is very special, and the core of the reason Groovin the Moo has been going strong for over ten years.

Support Belinda Healy on Patreon!
12% complete
When we reach $500 per month we will begin the official BMA Podcast. This will include interviews with some well-known musicians and artists, tips and tricks for publishing in print and online, as well as other discussion topics around Bands, Music and Arts in Canberra!