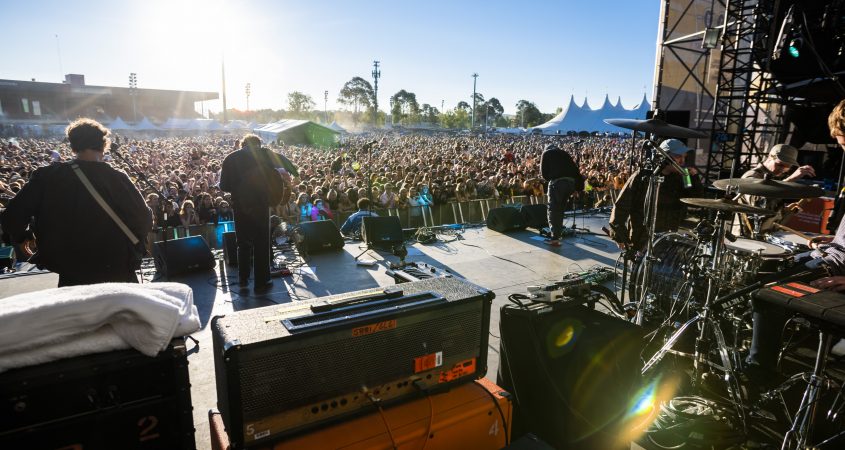 The Canberra leg of the Groovin The Moo festival had a big venue change this year, moving to Epic after UC declined to run the festival on its playing fields. The whole shebang was deftly shoehorned onto the arena, with good sound clearance between the main stages and the Moolin Rouge tent. Lost was the elevated view previously provided to punters by the sloping grassy surface at UC, but the rest was a neat fit. One early hiccup was that access directions on the GTM website were wrong. Rather than the advertised Stirling Avenue, drivers had to use Wells Station Road to access parking. However, it was a minor issue.

The festival lineup followed current music fashions, with a strong hip hop representation and plenty of dance music at the close. An obvious omission was any serious rock band, with the usual token metalcore act being left out this year. Women were well represented, as were overseas acts and strong local talent including APRA Music Award nominees.

Fashions on the field showed an increasing trend for ‘less is more’ and underwear as outerwear for women’s attire. Glitter was still in evidence, but its popularity was waning. Highlights in menswear were the guy dressed like an army bandsman with the large Canberra bus stop earrings, and the bloke in the flying helmet, goggles and shiny red shorts. Onesies were definitely out of favour, with only one person seen in a cow suit. (He got his wrist band caught in my back pack zip, and I lost half a Billie Eilish song trying to untangle it!)

A small but enthusiastic crowd greeted locals Glitoris who kicked off proceedings at the Moolin Rouge with their hard hitting, social commentary. One of the few rock edged acts on the dance card, they broadcast themes including women’s status and their opinion of Donald Trump and his ‘We’re going to build a wall’ trope.

All female group Erthlings had good songs but unfortunately lost vocal projection due to their lead singer’s head cold. A new song with a strong bass line had real appeal, and their Cuts and Bruises was a set highlight.

Angie McMahon positively smouldered, unrolling slow passionate songs with languid strums. She has a great voice that moves from a high, ephemeral lilt to a deep timbre. The audience had to wait for her hits, as she said she liked to play her sad songs too. But the hits did arrive, with great cheers greeting her songs Slow Mover and Pasta.

The hyperactive G Flip jumped from drums to guitar to keyboard with a vibrant performance of songs with serious messages about judgemental people, toxic relationships and, in Bring Me Home, those suffering from anxiety.

Haiku Hands brought a real sense of fun into the day with their jumpsuits, choreographed moves, and pop stick sculpture headpieces. Making their second GTM appearance in two years, their frivolous antics brought relief after dark themes from other singers. Could they be the Spice Girls for the 21st Century? A rapper from Ireland seemed like a novel act. However, after an overly long intro by his DJ, Reggie Snow appeared to follow the same style as other rappers.

Trophy Eyes got the mosh moving on the main stage with their bouncy rock. They featured singalong hand clapping choruses as their sweet licks peeled off into the cloudless sky.

Wafia kept it soulful with Heartburn, with the crowd joining her with ‘When I see your face’ in the chorus. 83 Days was a set highlight for her.

Jack River produced some of the best rhythms of the day so far, creating a forest of waving arms in the crowd. She teased us with a cover of Tal Bachman’s She’s So High.

The standout of the festival was bewitching Norwegian songbird Aurora. With an elfin appearance, dressed like an extra in Game of Thrones, she was haunting in word and gesture. Her high notes dripped like icicles as she sang and danced to the dark, dark opener Churchyard. There was the powerful ecological song The Seed with its message: ‘When the last tree has fallen and the rivers are poisoned, You cannot eat money’.

Regurgitator gave us a taste of the longed-for rock with a solid string of hits. They threw in their new song Light Me on Fire which captures the band’s signature sound. In Black Bugs, with no keytar available, they had to play the tricky bridge on normal axes. It was great to hear oldie Kong Foo Sing in the set, with Quan Yeomans commenting that, going by the age of the crowd, a lot of them would not have heard the band’s music before.

Sofi Tukker set their jungle themed stage afire with smokin’ hot dance beats that energised the punters, a few of whom had to be passed over the barrier to escape the crush in the mosh. Silver-clad Sofi crowd surfed while simultaneously singing and taking selfies with the excited audience. Including songs delivered in Portuguese gave the set an exotic touch, and the combo of Sofi’s high vocals with Tukker’s deep tones provided a heady mix. While the festival had a big hip hop representation, there was nothing to rival the unique Aussie character of Hilltop Hoods. Their music was warmed up with the inclusion of a brass section, and Ecca Vandal joined them for Exit Sign.

Billie Eilish hysteria ensured a tight pack around the stage. She bookended her set with her best tunes Bad Guy and Bury a Friend. The show was supported by incredible, creepy background videos, featuring huge spiders and wayward eyeballs and hands. Any comment from Billie Eilish was greeted with huge screams from the crowd, which lapped up her every word. Refreshingly, she encouraged them to leave their phones alone and live in the moment for a change. A throng made for the exits straight after her set. Marshalls did a good job of keeping traffic moving, although encouraging people to use the back gate to Wells Station Road would have speeded-up progress.

Overall, a very successful transition to the new venue, with just a little more rock needed in future to provide a more balanced line-up.