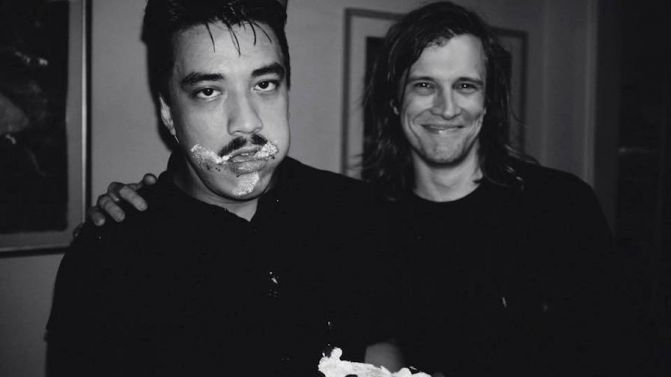 Polish Club’s new album, Iguana, doubles as Berocca for the ears, and a time machine. It wakes you up with rhythmic vibes that pulse through you and transport you back to those first nights out you ever had – filled with teen angst, adrenaline, and illegal substances [allegedly – Bossman Al] .

Whilst the duo’s second album is vastly different to its predecessor, you can still hear the jagged and distinctive vocals of David Novak, having that typical ‘Polish Club sound’, but this time they are accompanied by a funkier, incandescent sound from drummer John-Henry Pajak.

The new album, set for release on 7 June, is a buffet of 12 new songs that feel more like stories. If they were paintings, they’d be neon green. Inspired in part by the infamous Kings Cross nightclub, Iguana, the album takes you back in time to a place which was a haven of wild nights in the hopes to remind all that ‘growing up doesn’t necessarily mean growing out of the music you loved when you were young’. Speaking with front man David Novak, he said the theme for the album came from a revelation that it was a night time album.

“All of the songs are relating to that big night out where you have a lot on your mind and you try and work through that mentally, but also in that process do a lot of stupid shit physically when you’re out and making mistakes. It was kind of a nostalgic thing for our previous younger, more ill-advised selves,” says Novak.

The album is the second for the duo, and Novak comments on how the process was much harder than they expected.

“I wanted to push my vocals as hard as I could so every song is me trying to go at the top of my range or as loud as I can or as tricky as I can be within my skill set,” Novak reveals. “It was tough making that feel cohesive and real but it was a process that I think needed to happen. It was a lot of trial and error and I think you throw as much shit at the wall as you can and some of it’s going to stick and hopefully stick in a really good way. Eventually a year and a half later, I feel like it did.”

When reminiscing on the music Novak used to listen to when he was younger, he was grateful for his older sister’s musical influence and its positive affect on his career, and in particular this album.

“If it wasn’t for my sister who is six years older than me I would not be in a band, and if I was, I would be in the world’s worst band,” Novak admits. “When I was 12, she was 18 listening to Pearl Jam, Nirvana, Blind Melon and all those cool bands of the time. So I took that all in by osmosis.

“At the same time, I was a dumb kid who enjoyed listening to Destiny’s Child, Blackstreet, Mase and stuff like that [Nothing wrong with that, mate – Bossman Al]. In terms of my personal song writing, it’s very much manifested itself in a way that’s combined those two things and somehow that kind of grungy, hard rock melded with the sometimes awful, sometimes amazing ’90s R&B and pop.

“I think that’s where I get the melodic sensibility and catchiness from but also being able to do that on a guitar that’s super loud and distorted somehow works.”

Novak reflects on how the nostalgia of this album is exacerbated by the fact that Kings Cross is a shadow of it’s former self ever since the implementation of the lock out laws in 2014.

“We don’t see the same community spirit amongst musicians and music goers in Sydney and NSW as a whole,” Novak laments. “It’s sad, but it’s all peaks and troughs and it’s bound to come back. I think as long as people are free to keep making music, we need to encourage more people of all walks of life and genders to be making music, and I think that’s the first step to resurrecting the dying nightlife and music scene.”

In the album bio, John-Henry Pajak comments on how the album was just as much inspired by nights alone as nights out, and how life on tour can be an isolated journey. When asking Novak if he also felt this way he said:

“It’s times like this (at home) when you’re sitting around and killing time to the next interview or trying to figure out the next social media post that you get caught up in your own head. I don’t really worry about the tour stuff, I kind of look forward to it. It’s the pinnacle of what we all do this for.”

With that in mind, Polish Club are just about to hit the road on their Meet Me At The Iguana Tour, hosted by triple j. With a new range of synth sounds, light shows, 12 new songs to play, and an honorary third band member in bass player and producer Wade Keighran coming on the road, Novak says they feel like a whole new outfit.

The shows themselves won’t disappoint as they want them to be more of an experience. Says Novak: “Especially because this album is kind of like ‘a night out’ so we want to get that atmosphere in a live setting.”

With their 18-show tour beginning on June 8, you can look forward to them returning to Canberra, playing at UC Hub on 14 June. Get your tix here.

Liked it? Take a second to support Lucy Croke on Patreon!

Support Lucy Croke on Patreon!
7% complete
When we reach $500 per month we will begin the official BMA Podcast. This will include interviews with some well-known musicians and artists, tips and tricks for publishing in print and online, as well as other discussion topics around Bands, Music and Arts in Canberra!