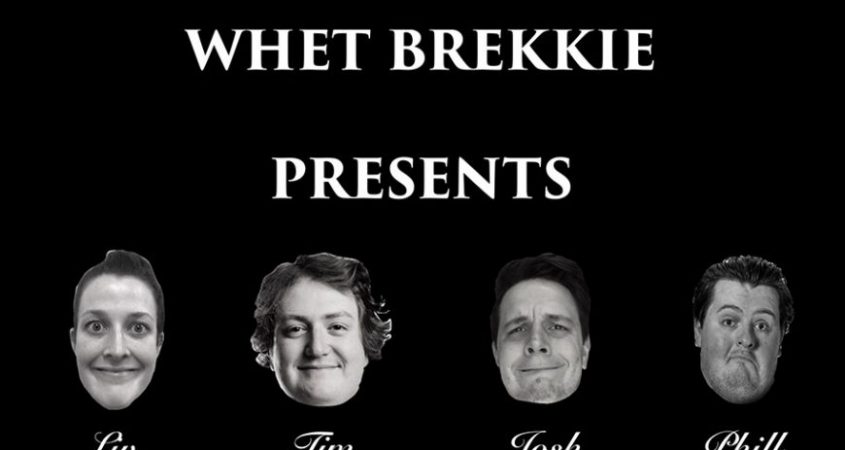 There’s some things that are near impossible to describe in words. Like love. And grief. Oh, and the Canberra Comedy Festival show that the sketch group Whet Brekkie put on. Nevertheless, here I attempt the near impossible. It is my job, after all.

I knew that I was in for a surreal experience when I came to watch the show. Whet Brekkie Presents is a sort of spiritual successor to Pilot Season, a sketch show I saw at last year’s festival. That show was ridiculous and nonsensical and wacky (in the best way).

So when I say that Whet Brekkie outdid anything ever seen before in Canberra on the surrealism front, I really mean it.

I have considered listing all the strangest characters and scenarios here, but that’d be pointless; it didn’t make a lot of sense watching it, and it would make even less sense in writing. The show was really just a random assortment of strange characters, scenarios, and dialogue, mashed together to create an hour of comedy.

And, somehow, it worked; it worked really well.

Every sketch was full of twists, turns, and unexpected punchlines. Whet Brekkie refused to be constricted by the boundaries put on mainstream comedy; the whole thing felt like a bizarre fever dream. It wasn’t necessarily brilliantly crafted or amazingly polished.

The group was definitely constricted by the small space that the Civic Pub Whiskey Room has for shows, one that definitely wasn’t designed for performers running all around it. But it was a ridiculous amount of fun.

Today’s comedy is often based around social commentary and, while I’m all for that, it was nice to see a show that was laughs just for the sake of laughs; entertainment for the sake of entertainment. Before seeing Whet Brekkie Presents I have never expected that one day I would be reduced to tears by slapstick comedy, or by a silly pun. I’m not exaggerating too much when I say that Whet Brekkie changed the game, at least a little bit.

There were some moments when the weirdness was a bit too much and the narratives turned rambling, and at those times Whet Brekkie Presents breached the line into humour that’s so absurdist as to not really be funny.

That being said, these moments were rare, and outweighed by many moments of pure comedic genius. Weird, raw, unadulterated comedic genius; the kind that only gets unleashed in Canberra once every year.

And so, I look forward to the 2020 Canberra Comedy Festival, and hope that the folks behind Whet Brekkie once again let us peek into their weird and wonderful heads.

Support Agata Nabaglo on Patreon!
11% complete
When we reach $500 per month we will begin the official BMA Podcast. This will include interviews with some well-known musicians and artists, tips and tricks for publishing in print and online, as well as other discussion topics around Bands, Music and Arts in Canberra!