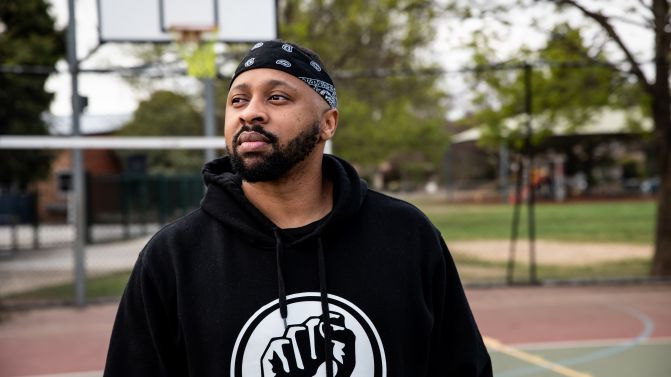 South African born Canberra based rapper KG has released a new single whose focus is a lot broader than what was displayed on some of his earlier releases like All Black and Forgive Them.

Though not necessarily deviating from his social justice advocacy altogether, Come Along blends KG’s typically hard-hitting amalgam of rhymes, hip-hop sounds and textures, beats and spits, and continues what his last single Change introduced, which was to mix the personal with the political to arrive at a highly palatable three minutes of rap, replete with commercial appeal.

Right from the get-go, there’s a hook; an intro chant whose hypnotic cadences I wanted to hear again later in the song (it doesn’t appear). This leads straight into the verses where KG begins, ‘gather round all my people from across the globe’. A rallying call that by its generality is welcoming and inclusive. Who are KG’s ‘people’? They’re us. And they’re also the marginalised, of course.

But this sort of simplistic yet salient lyric is an act of embracement and a good indication of what’s to come. KG’s verse raps are strengthened not only by his perceptive attention to detail but also by the syllabic arrangements, the miniature hooks within the range of the phrasing.

It’s further bolstered by the suitably minimalistic hip-hop instrumentation and the punctuating background vocals and double tracking. We’re soon led from the mercurialness of the verses into a varied version of them which assumes the guise of a pre-chorus. This section retains the verbal flow but with repeated lyrics, a sense of strictness in the phrasing which creates melodic patterns that feel effortless and mollified, and for good reason; it helps the transition into the chorus.

Enter Mirrah. Her voice compliments the melody and initiates a persuasive deviation. The arrangement of notes here has a melancholic edge and a sweetness which juxtaposes well with the ardent flavour of the rest of the track. This is a good technique which perhaps separates one successful genre-crossing hip-hop track from the rest.

Come Along is a worthy addition to KG’s catalogue, a track that retains the fire yet adds a thoughtful glow.