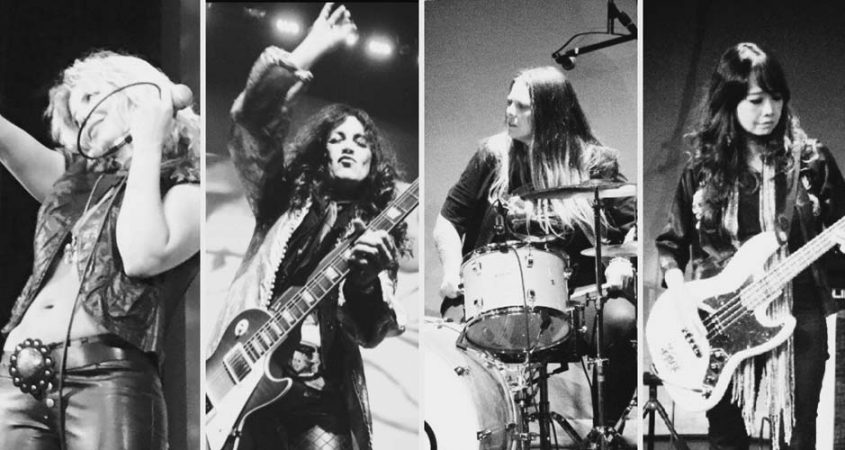 BMA’s Jeremy Edwards caught up with Lez Zeppelin’s Steph Paynes ahead of their Thursday, 4 April show at Canberra’s The Basement.

Mentioning cover bands and tribute bands can often create an image of a group of musicians that, instead of doing something original, simply copy another already famous act.

Well cast that aside, and meet Lez Zeppelin.

Yes, these guys cover Led Zeppelin, but the way they channel one of music’s most iconic bands is something that simply has to experienced.

For some reason or another, Australia is a bit late to the Lez Zeppelin party. They’ve been going since 2004 and have received critical acclaim across Europe, Japan and the U.S.

Lead Guitarist Steph Paynes was good enough to catch us up from her home in New York ahead of their upcoming Australian East Coast tour.

Based on this tour Steph says regarding Australia: “We should make it at least an annual event. Let’s see how it goes. If everyone comes to the shows, I think it’ll work. We gotta get them out and when they hear it and see it, I think they’re not going to get what they expect. Come and see!

“Unless I’m living in some sort of alternate universe, which might be true,” Paynes continues, “it sounds like it’s going to be absolutely spectacular. It certainly has been a bucket list item for us. We’re very excited.”

Lez Zeppelin were originally set to come out mid 2018 for the first time but the tour was postponed after their promotor had to deal with a serious eye condition. However, Paynes explains: “Sometimes having to wait just makes it that much more scintillating! I just have this feeling that people are going to really dig it, it’s just a really fun, high-energy concert. The bands gonna be in top form.”

On being labelled a cover band, Steph has a firm view.

“I feel very strongly that this is not a tribute band the way one would ordinarily consider it. It’s not impersonation or anything like that, it’s a group of musicians getting together; it’s a real band.

“Led Zeppelin were four musicians that played together in a very mystical and intertwining way. Any kind of music like that where musicians are speaking to each other and communicating as they play, that’s a real group and that’s what we do, that’s what we are.

“The music that we play is Led Zeppelin’s music but we claim it, we own it, we throw ourselves into it and we all have a great passion for it,” Paynes enthuses. “That’s why it’s not a tribute. Its not like some sort of circus act: like you’ve got the same exact riff and the same little dragon on the left side of her bell-bottoms.

“I very much appreciate the point of leaving the ‘female’ out of it, that’s what we’re striving for world-over now, it’s become an understood concept. But whatever it is, I love to play and that’s why I do it. I’ve wanted to do it since I was five years old.”

It’s difficult to describe this band initially, without using the words cover or tribute but Paynes looks at it this way:

“It’s hard to come up with a word; music is not something you can easily describe in words. It’s an art to try to describe something that you’re hearing with a language other than that. It eludes time, it eludes all sorts of other concepts that make it difficult to put your finger on what exactly it is that’s moving you so much.

“Even in this sense: what is this band? Is it a this, is it a that?

“The closest thing we’ve got is that it’s a She-incarnation, and the she is becoming less and less relevant, in a good way.

“When I first started out the gender gap was notable and it was much more shocking. I still think it’s shocking; this was like four women coming out strutting and parading like male rock stars, like peacocks and really taking it on. Even now it is that way but it’s hard to describe what it really is. Come see it, come hear it, and come experience it!”

As previously mentioned, Lez Z has been around for about 15 years now, but they’re relatively new to the Australian audience. During a recent skiing trip Paynes did some soul searching.

“I was thinking this past week, as I was taking a moment to be on a mountain which is something I so rarely do, feeling like this (other) band is doing this, and this (other) band is doing that, and we’ve done so many things. When I hear how we play and I see how the audience responds and I weigh what we’re doing against some of these other bands that are trying to do the same, I think we should be opening for this group or we should be doing this and that and I do think it’s taking a long time in a certain way.

“There have been a lot of amazing accomplishments and I couldn’t even make up the kudos that people have written and said and yet it is still one of those things; working hard to get this thing over the top and into another place.

“I think it’s going to be really fun in Australia, maybe it takes you guys to appreciate it, maybe we’ll just move to Australia. I’m ready, let’s go!”

While they do play Led Zeppelin’s music, on their first album there are two original instrumental tracks and one of them in particular got an incredible amount of attention. Paynes tells:

“First of all everyone thought it was a Led Zeppelin song, like a lost Led Zeppelin track. It’s an acoustic number called Winter Sun, that one is in an alternate tuning, it’s one of those Jimmy Page things. I was probably just trying to learn one of his things and I went off an wrote something similar.”

“Recently I was asked to be on an all-female guitar compilation so I wrote a number for that. Steve Vai had a record label so that was the first compilation on his label, called She Rocks.”

Lez Zeppelin are fantastic musicians in their own right and their show is an experience that seasoned ‘Zep fans will enjoy but will also bring that era of music to a newer audience. They will be playing at The Basement on Thursday, 4 April. Tix are available from Oztix by clicking here.