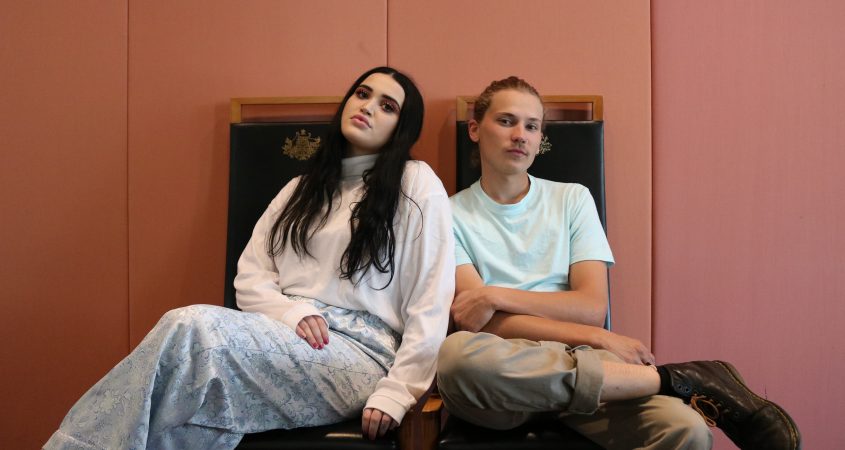 BMA caught up with the bouncy synth pop track come nostalgic synth sound of scintillating duo Neko Pink, who will be busting out at Art, Not Apart tomorrow, Saturday 16 March.

Neko Pink is just us, Africa and Angus.

We are a pop band, dreamy synth pop. We have a lot of 80s influence, our new sound is more modern leaning though. We don’t sound like anything we know though. Our music is for driving around at sunset.

So many… Tame Impala, Michael Jackson, Mallrat, Duran Duran, biggest though would be an LA based artist by the name of Part Time, he is a genius. A lot of rappers for Africa though.

I’d say just watching people from our community start to fall in love with our music and seeing the support. When a stranger comes up to me and says they love our music, it’s so heartwarming.

Angus: Releasing our EP. I’ve been in a handful of bands before but they all fizzled away before getting to the stage of major recording, so having doing that with only Africa and I, raising all the money ourselves and recording and writing and releasing it all ourselves would definitely be it… so far.

Africa: For me, when we released No Thorns, I had to hustle so hard. I wanted to release No Thorns in a very short time frame.

From the music being written, to writing it, recording it, mixing it and mastering it and releasing. I think it was a total of eight days. I worked a 13-hour day during that time and I brought my laptop to work and wrote a lot of the song on my breaks at work, the night before recording I stayed up until 5am finishing writing it then had to be up at 9am to get a train to Canberra to record with someone.

The recording session fell through and I tried so desperately to find someone else but no one else could with such late notice but eventually I had to buy all my own recording equipment and record it by myself for the first time.

It was a massive accomplishment getting it out when we did and the fact it’s our most popular song makes me very proud for pushing myself and persevering. That’s my proudest moment so far.

So many. We want to organise our own festival. Play more shows and festivals, make merch, release a few new singles this year.

Africa: Hanging out with Gus, going to local comedy shows! Canberra has a pretty big comedy scene, you should definitely check out Maddy Weeks, a local comedian!

Angus: People who doubt us.

Africa: People with bad attitudes, negative mindsets and people who bring other people down. Oh, and single use plastic.

Angus: People who doubt us.

I think more people need to connect and network and to be the change they want to see. I want to see more artists stopping in Canberra and for Canberra to show them enough support they want to come back! Not just for GTM or Spilt Milk.

We are debuting our brand new single Loner, tomorrow Saturday 16 March at Art, Not Apart festival at the Shine Dome. We are also playing with GTM unearthed competition winner Kirklandd for his single launch at Mr Wolf Saturday 23rd! AND on April 5th we are playing with our favourite local artist, Genesis Owusu, as supports for Boo Seeka. Genesis dropped two songs today and they’re both incredible.