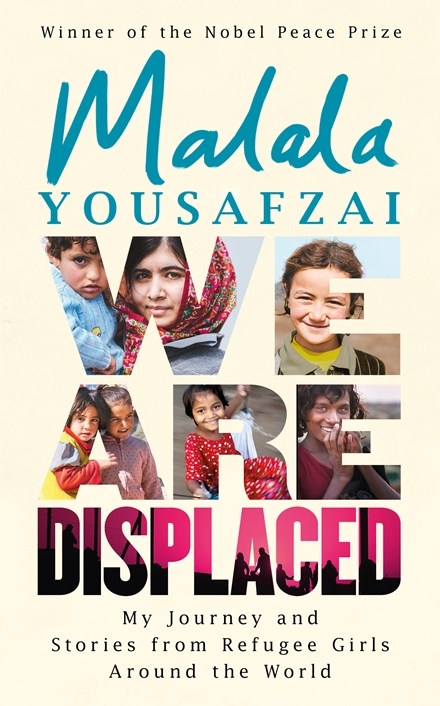 Malala Yousafzai entered the public consciousness in a big way when she was attacked going to school in 2012. Growing up in a Taliban controlled part of Pakistan, Yousafzai’s father ran two schools, one a girls-only school, in the face of increasing aggression and threats of violence that culminated in the bombing of schools across the region.

Yousafzai became an advocate for girls’ education when she was still in primary school, blogging for BBC Urdu under a fake name from the age of 11. When she was 15 her school bus was boarded by the Taliban who shot her (and injured two other girls in the process) in retaliation for her activism. Yousafzai survived, although she (and eventually her family) had to be evacuated to the UK and weren’t able to return to Pakistan for years.

We Are Displaced is a book in two parts. The first half skims the more well known aspects of Yousafzai’s story, already described in her first book I Am Malala. Here it delves into the struggle to reacclimatise in England and how her immediate family coped during the time they were displaced internally in Pakistan, travelling between different arms of the family to try to lessen the burden of their homelessness on any one household. Yousafzai relates what it was like to be a child beset by large fears, dull worries, and homesickness after being driven out of her hometown during a military operation to uproot the Taliban.

In the second half of the book, Yousafzai has collected the stories of other girls and women she’s met travelling the world for her advocacy work; some of whom have made it to safe harbour with others still stuck in refugee camps or separated from family members.

In both parts We Are Displaced does an admirable job of humanising a heterogenous, often targeted and misunderstood group of people by giving them a platform to speak for themselves. It’s also a surprisingly accessible read in spite of the heavy and sometimes graphic subject matter.

Told in short first person chapters by girls who are focussed on the present and future as much as the past, We Are Displaced reframes the traditional refugee narrative away from overwhelming tragedy and survival to something personal to the contributors. These young women, like any normal people are pragmatic and optimistic in amongst all the other emotions that come with their experiences, and are busy trying to build futures for themselves wherever they’re situated.

Profits from We Are Displaced will be used by The Malala Fund to further their work for women’s education.