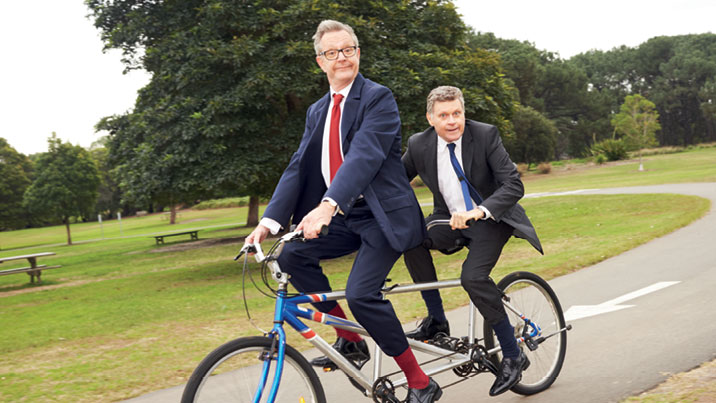 Doug Hansell, young veteran of Aussie TV series ranging from Home and Away and All Saints to Underbelly: Badness as well as dozens of major stage productions, is back in Australia to appear in the 2018 The Wharf Revue.

Since making his Wharf Revue debut in 2014, Doug has spent the past four years in London, which he now calls home, working with the likes of Miriam Margolyes; Jeremy Irons; and the creators of Les Miserablés and Miss Saigon, Alain Boublil and Claude Michel Schöenberg.

Doug took time out from a busy travelling schedule with the Revue’s talented cast and crew to speak with BMA’s John Harvey about how The Revue’s 2018 season is unfolding.

BMA:  You’ve done so much since your involvement in the 2014 Wharf Revue, in theatre and TV and teaching; how is it to be back in the Revue?

DH: It’s terrific, actually. I’ve been in London for almost four years, and I’ve been lucky enough to work in a completely new environment with some fantastic artists.  This is my first time working back here in Australia since 2014, and it felt like the right time to come home and reconnect with friends and colleagues.

Also, I didn’t have the opportunity to work with Drew last time, and I was looking forward to that. And I love working with Jonathan! He’s a very generous man. And London gets pretty miserable at this time of year — so I packed my bags, and here I am!

The Revue is a unique format to work in. It’s neither strictly play nor musical; but it’s about as “showbiz” as you can get. And with all the costume and wig changes, it’s crazier backstage than anything you see on stage!

But I’m also much more confident doing it, this second time round. I knew what I was letting myself in for. Australian politics is so ripe for taking the piss out of.

BMA: How does it feel when it finishes?

DH: Like any show, it’s always bittersweet because you become abnormally close to the people you’re working with for a set period of time and then it’s over. I think of myself as an itinerant cast member of The Wharf Revue. Rachael and I have become great mates, and Andrew Worboys is a phenomenal musical director.

BMA: I’m sure you’re already missing Phillip Scott’s involvement in this year’s Revue. I understand that Drew has had to pull out. Has the change in lineup altered the writing at all?

DH: Well, apparently Drew had never missed a performance in 18 years until he had to pull out four days into this season due to ill health. But he’s doing great and is intending to come back for the Sydney season. He’s actually been to a few of our recent performances to give notes; you can’t keep him away!

We had another actor come in for a week, to cover for him, and now that we’ve had two weeks with Simon, the show is really starting to settle. It’ll be nice to be in Canberra for two weeks and relax into the environment. Because Canberra’s so close to the politics, we value the Canberran audience response highly. With Phillip having moved on and Drew unwell, it’s the first time the show has been presented with only a single original cast member. But it shows that the show is adaptable and can be just as thrilling for the audiences — because, ultimately, it’s about the writing.

Back in 2014, I’d watch Jonathan’s Paul Keating and Amanda’s Julia Gillard and I’d feel so inadequate. At that point I was playing Christopher Pyne and Scott Morrison amongst others, and I had five weeks to conjure up some semi-passable impersonations. But then I had to remind myself that they’ve been doing these characters for years, so I cut myself some slack.

This time I’m adding Barnaby Joyce to my repertoire. Of all people! I look nothing like Barnaby — I hope! When you’re called in to join the cast of this show you have to be confident that you’re a quick study because some of these characters you hardly know. When Drew had to pull out, rather than place the burden on Simon of playing Pauline Hanson — and Drew’s been playing Pauline for 15 years — Jonathan filled the gap with a Paul Keating address, and that’s gone down incredibly well.

BMA: Is everybody singing this year? Is there anything that audience members should particularly be on the lookout for?

DH: Yes, it’s a big singing show, actually, with lots of music and songs and sequences.  Rachael [Beck] does a fantastic Michaelia Cash. There’s a Trump sequence at the end in which he has designs on becoming Leader for Life.  And I sing an aria as Scott Morrison from a Gilbert and Sullivan operetta. Scott really strikes me as a G&S-type guy.

What Andrew’s done musically is fantastic. Whereas Phil used to prefer the music to be live and acoustic, Andrew has created a bunch of multilayered tracks that make it sound like we’re in a Broadway show.

BMA: Is the Revue more susceptible than other shows to spontaneous improvisations?

DH: No, I’d probably say the opposite is true. The structure is very finite. The boys can tend to be quite prescriptive about what they’ve written, but that’s because they’re masters of this format and they know what works. For instance, on paper a certain line may not strike you as particularly funny, but when you incorporate the rhythm and pay attention to the way it’s structured, if you deliver it well, it gets a huge laugh.

In this show, you sort of have to leave your ego at the door so that it doesn’t get in the way of the writing, because ultimately that’s what the show is about. But it’s a hell of a lot of fun to be the messenger!

The Wharf Revue: Déjà Revue will be bringing down The Playhouse at the Canberra Theatre Centre from 23 October 23 to 3 November 2018.